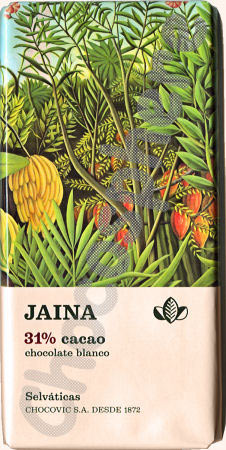 Impact
Chocolate makers, ever strivers to attach themselves to exotic treasure & lore, have to dig deeper to find it now that the obvious has been dredged up. This named after the Mayan island off the coast of Yucatán where Jaina burial figurines of delicate detail accompanying the dead on their after-journey were unearthed (written about in Michael Coe's The Maya). Jaina-the-Bar here delivers enough finesse to deserve the title & certainly laps most of the White Chocolate field whose run-of-the-mill usually spits out 'daddy badges' - those baby snots coughed up & hurled on shirts collars.

This particular monkey cacáo sees nor speaks no evil but looks, smells, feels, & tastes different... because it is. High-brow cultured confection (thanks to a spoonful of yoghurt) sticking a quiet o'rang-a-tang, bright as a nuclear-powered light bulb, in the mouth.
Appearance   4.5 / 5
looks different than most great Whites
Aroma   8.7 / 10
strong White Choc mousse head -> milk, sweet butter, & a whiff of cheese beneath -> summing up lemon-drop honey; overall light, clean, & unobstructed by any vanilla
Mouthfeel   12.3 / 15
Flavor   44.6 / 50
breaks down cream cheese -> lemon burst -> long tang bite -> melts to golden butter -> releases cacáo cameo -> reconstitutes according to its texture: cheesecake
Quality   17.9 / 20
Transparent & unique. Plop of yoghurt tilts the profile tremendously & favorably yet maintains an ever-so-light flavor thanks in part to no vanilla whatsoever - a difference detected early on in the aroma - allowing elements to ring thru except, critically, cacáo butter which suffers some amnesia (deodorized in the processing), subjugated to a backstory.... white lightning without much thunder

Still, a White by any other name that puts you in a good place.