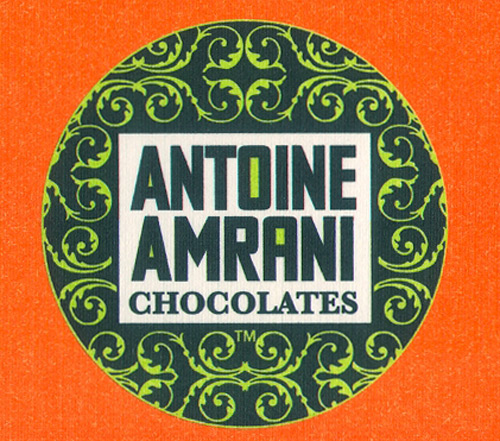 Impact
A pure business play (RE: $$$; lots of backing) suspiciously close to the sound of a chocolate ‘Armani’... show more »show less «

... but in name only. Where that Italian designer cuts sharp contoured lines to suit the fabric & physique, this confectioner, of noted pedigree in the Philly restaurant scene (ex pastry chef at 5-star Le Bec-Fin), is more knock-off than original, adhering to the revenue model of a Norman Love, the acetate transfers of, say, Artisan Confections, while aspiring to the flavor scenarios of Moonstruck.

When asked what distinguishes his line from the others, the reply came back with “the look, the packaging, the technique for a superlative chocolate experience”. Well, that’s nice, especially the “superlative chocolate experience” - repeated intermittantly in mantra-like monotones... & thanks for the PR talk, now let’s dispose of it & get the insider perspective: the equipment, the couverture, the sourcing of ingredients, culinary influences, quality standards, flavor considerations, molding, personal signatures, or the heart & soul of the philosophical approach seeing how scripture observes that humans do not live by bread (errr, chocolate) alone.

Excluding the technique that remained mysterious after inquiries about it (non-existent trade secrets, perhaps?), nowhere in there is a mention of good taste, or any taste for that matter.

A fellow choc addict, who visited the cavernous warehouse that belches these pieces out, writes: “... dreck; entire box a disappointment. Memories of a 5 & Dime Sampler Valentine. No wonder he was running out the door.” The last remark in reference to how she gifted him with a serious bar of Bonnat’s 75% Ceylon that just chocs the taste buds off, which the master chocolatier glanced at quizzically while, apparently disinterested, quietly & casually placing it down on the counter, then bolted for the exit.

Did he make a similar move upon hearing that Michelin had dropped Bec-Fin a notch to 4 stars, which might explain his sudden appearance in the chocolate world?

Just wondering.
Presentation   5 / 5
got ‘the look’, the look of money; extraordinary detail to the box, the tags, the color wheel, the luster-dusted & silk-screened jewel-set nestled in this display-tray regalia w/ well-sealed finishes
Aromas   2.3 / 5
coldly entombed; even a close-in sniffle yields up only a lone nut (solitary pistachio)
Textures/Melt   6.8 / 10
Flavor   33.6 / 50
accessible in overly-confected formulations, not so much forward (nor backwards despite employing an organic couverture that harkens back to old days when ‘organic’ meant ‘flat droning flavor’) but sideways, as tastes splay in aimless directions w/ only minor effervescence & then only as supplied by sugar (the aforementioned ‘technique’?) delivering generally low amplitude to generate a sullen & glum feeling
Quality   20.9 / 30
Devious; carefully calibrated to sway the masses in a cerebral & soulless gambit that comes off as apprenticeship.
Selections
Pure Dark - 70%; balanced cocoa / cream ratio; minor bitter-bites caressed in dairy-fat w/ a thin trail of stringent smoke at the back; a bit unremarkable if straightforward w/ few nuances as to be expected for this classic
Raspberry - violet luster-coated shell; sweet, barely-tart, berry-concentrate nearing gummy-bear strength w/ virtually no chocolate backup; fine flavor, such as it is
Earl Grey - confused; Dark cherry-inflected stemwinder but at the front burner, holds poise throughout despite flirting w/ syrup, oddly revealing modest cream, even less tea, & almost no bergamot; intriguing all the same
Almond Crisp - thick praline of almond butter cut by rice crisp folded into Milk Choc for micro-crunch ‘n pop; runs sweet on the sugar & shy on the chocolate; overly confected
Pistachio - foretold in the Aroma but, strangely, precious little of it on the tongue; Dark on White Choc cream ganache; heavy dessert fare dripping in maple sap effects & chocolate blanks until the shell melts thru for a coffee-grinder of a flavor; bizarre & banal
Duo Café - gel-center inside hard thick shell; tremendously robusto, a really fresh cup of cold joe that just annihilates any remnants of cacáo (if there even were any); completely off-kilter / out-of-balance & clear sign of missing the mark; needs a do-over
Orange Grand Marnier - a lot of moving parts: nice initial hit – fresh orange zest, then liquor kicks it, add cardamom + one of the few pieces in the collection w/ true chocolate presence to unite the elements toward... a liqueur-soaked wafer sensation; all cylinders firing; a real force
Banana Rum - heavy-handed cinnamon adds a graham cracker element to this banana cream-pie filler; a tad dipsy-doodle, not enough dandy