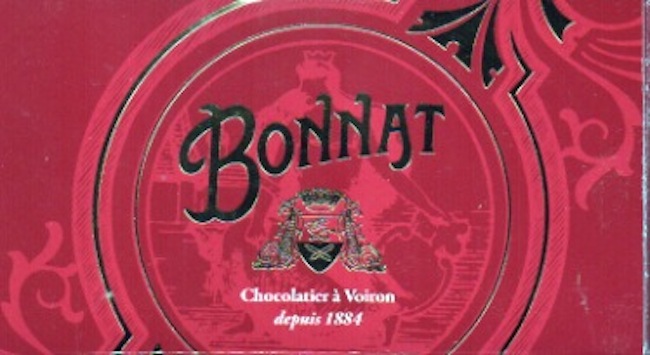 Impact
Centre ville right across from the cathedral, same address, four generations, one family,… it all fits together.

Bonnat since 1884. A supernova… perhaps the most enduring & dependable choc star in the firmament.

An institution & treasure trove of chocolate.

Presentation   4.6 / 5
whoa: a box-within-a-box (each of which stands on its own as THE box)
the colors, ribbons, tissue, seals… all A-1
pieces snuggly but neatly nestled within
Aromas   4.1 / 5
a fruit basket
Textures/Melt   8.3 / 10
Flavor   43.8 / 50
First, SVP, let's discuss what Bonnat is not: neither eclectic nor eccentric. Ditto much in the way of experimental creativity. Indeed, many variations on a theme here (mainly pralineés featuring hazelnuts & almonds).

Instead Bonnat is time-honored, tried 'n true, ego-free. It delivers classics with fresh aplomb.
Quality   26 / 30
No failures. None (stop lying, liar… well, ok one -- see Nougatine in the Selections section below). And this from a deep-well of a box: 20 pieces in total. Consistency embodied. Few boxes can make such a claim.

Equally few chocoscenti however will swoon over these pieces since they inhere with a regal reserve.
Selections
Orangine -- fruit just explodes over the lip until almonds engulf the citrus, whence the piece turns serious instead of merely exuberant

Pavé (green wrapper) -- hazelnut praliné of major cream backing to offset it from the classic Italian gianduja; nonetheless, both the nut oil & meat break thru with abandon by the finish; a thrill seeker

Ménados -- another condensed nuclear cube; this one an almond praliné doused in coffee; every component evident, & so too their fusion… around a quantum-phantom honey tone

Suprème Fruits Rouge -- as its name declares ("supreme red fruits") though mainly 1 red fruit: cherry enrobed in a Dark shell & ganache; might be better to call it not black cherry but 'Brown Cherry'

Poire William -- identical format as the Chartreuse just with pear liqueur instead, which, along with the Dark shell & crystal sugar really stack tight together; perfect symmetry / symbiosis

Suprème Caramel -- unconventional; no pull whatsoever on the teeth, almost runny liquid & a flavor progression in the guise of cherry-balsamic to a liqueur; strange yet fine, such as it is

Krugette -- orange confire or candied orange dipped in Dark chocolate that is… well, simply what it is

Brazil Praliné -- a double, even triple shot of sorts, almond praliné, thick & rich in flavor oils, hits on a robust coffee... the twain simultaneously, & remarkably, both complementary & contrastive, asserting their own identity while surrendering to a considerable Dark chocolate in its own right; a titan

Suprème Café -- ganache au coffee; similar to the Brazil (above) in its understated infusion that, combined with choc, conjures a tonka bean; superb

Carré Praliné -- the French equivalent of the Italian gianduja but with almonds instead of hazelnuts; point-on… buttery warmth & goodness balances the sugar

Noix Gianduja -- quite unique for the category in that a) it barely tastes of gianduja, perhaps because b) Bonnat tops the piece with a whole walnut which convoys on a lightly whipped ganache all enrobed in Dark; excusing the confusion, under the axion 'no harm / no foul' few will object, most will demand another one

Nougatine -- what could've been a hard butter toffee instead fulfills its description of a croquante au miel ("honey crunch"); in effect a sugar blast

Zilha Pavé -- daring exposition of marzipan & Kirsch which go together like… well, almonds & cherry which may not sound so audacious except the unabashed, fortified nature of its strength risks an all-out mash unit commandeering alcohol as some antiseptic analgesic & mistaking nut meats for some wound dressing but that would underestimate the skills of Bonnat who puts it on equally heavy to balance the forces into equilibrium

Fondinette -- gianduja plain & simple… so unadorned in its Milk Choc base & so radiant in its nutsome flavor that it strikes as extracted essence; on-point / spot-on

Coquille -- almond praliné brings a light orange-inflection while a whole filbert sits at the bottom of the pile for a thumping nut crunch; in sum, sweet meat

Hérisson -- another hazelnut praliné; pitch perfect between the filbert, chocolate, cream & sugar…. none standout ind reference to their symphonic measure

Surfin -- a bar of chocolat fondant utilizing an original recipe of founder Félix Bonnat which combines cacáos of the Americas (Brazil; Mexico; Peru; Venezuela) with those of West Africa in a 65% compound; sweet & smokey of spiced cocoa... the stuff upon which foundations for lasting legacy are built.