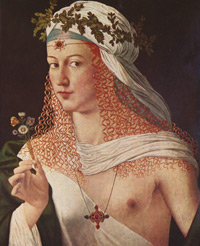 Celestial Ambrosia as a Roman Candle... that transforms Ceylon’s holy cacáo into what fellow Italian Lucrezia Borgia -- the hazel-eyed daughter of that libertine Pope Alexander VI -- might call an ‘immoral pleasure’. So good it could be illicit. Enticing as this bodacious Italian TV talk show hostess: 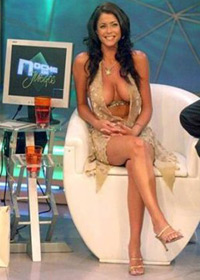 Bessone has demonstrated elsewhere in his Boxed Chocolates some exceptional work in the gianduja category. This unbelievably & amazingly surpasses even that peak standard. Basically his Gianduiotti Classic bombone with a bit more chocolate backbone.

The Ceylon Red cacáo is stupendous in this match, carrying those exclusive reserve red notes, making wine & chocolate pairings redundant & redonkuloitus. Ditto (almost) the hazelnuts since the Ceylon already inflects with resident hazelnut tones which this just gorgeously amplifies... & then some.

If there’s even the most remote & minute criticism - & this merely straining in order to find fault & walk back the praise some – it possibly may be the tiniest fraction of excess sugar. Or better yet, change the plastic wrapper on this & all of Bessone's bars for that matter (which creates some unsightly & off-putting plastic-wrapper transfer onto them). Otherwise, as the glyph formerly known as ‘Prince’ sang in Raspberry Beret... ‘baby I wouldn’t change a stroke’.

Given the rather average bar work in the rest of Bessone’s portfolio begs whether this deserves such a lofty position in the chocolate pantheon. That an inconsistent micro-processor who has hardly made a mark is controversial enough; but for a Flavored bar to sit at, or even near, the pinnacle is downright scandalous, even sacrilegious.

Maybe this bar represents the fruit of Silvio Bessone's labor in struggling thru all his other bars in climbing the trellis of the rankings to attain this achievement.

So while justice must be blind, that doesn’t mean she lacks a sense of taste. This has to be judged for what it is, on its own merits: one of the greatest confections, dare say ‘chocolate bars’, on Earth.

“Let justice triumph, even if the world perishes by it” - Kant