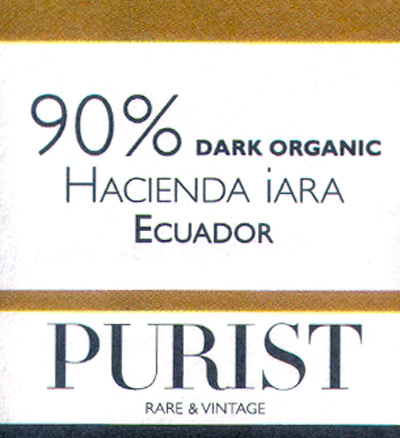 Impact
Coppeneur, the actual bar-smith behind this, checking into Hotel Chocolat & partying like it’s... 1913... to Stravinksy’s Rite of Spring released the same year, right before the Czar, the Kaiser & WWI ruined a generation of Euros, & blight wiped-out the grand cacáo Nacionals a world away in Ecuador. In the ensuing chaos, they left this treasure back in the room where clever hotel proprietors seized then re-purposed it with their own private label.

A new season & another crop later & this, sugar-wise, falls in between the middle of those two.

Outstanding CQ / core chocolate for this or any percentage. Enough savage underbelly remaindered from Coppeneur’s 100% despite a fat layer of cocoa butter (CBS [Cocoa Mass/Butter/Sugar ratio] an obese ~1:4:2) which controls this bar’s beastiality while sacrificing the high esters found in the more raw materials for this bar; namely, Coppeneur’s Iara Whole Bean and Iara Nibs.

The net result neither enjoys the hedonic flourishes of the DeBondt nor suffers the crushing descent into Slitti’s Tropicale hell (also a 90%er from Ecuador).

Just another solid chocolate declaring Coppeneur 'King of the Beans'.