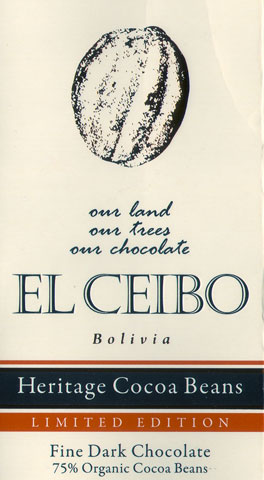 Impact
Racecar driver Mario Andretti says if everything seems under control, you're not going fast enough.

In chocolate the saying goes something like 'if everything feels smooth & tame, you’re not hacking thru cacáo’s backyard: the jungle'.

And always remember while in the moment never let imperfection get in the way of the overall panorama. For as Solomon reminds in Ecclesiastes, "a living dog is better than a dead lion."
Appearance   4.5 / 5

Aroma   7.8 / 10
the spur & lash of pungent cocoa -> grows leguminous to... what the funk-in-the-trunk: pecorino (quite in concert with El Ceibo’s un-heritaged 75%) -> pulls up diesel fumes & crushed purple corn in potted soil -> all these blows cushioned by hazelnut oil
Mouthfeel   11.4 / 15
Flavor   44.2 / 50
good, really good coffee grounds into fleeting toffee -> little hit of micro-dirt -> wintergreen compound found in Amazon grape (Pourouma cecropiaefolia) -> anise to licorice to molasses -> bitter tonic w/ gentle grenadilla twist -> guava -> as butter melts thru the length comes to brazil nut skins & almonds -> backs out the way it starts (wintergreen clears off more tonic as if on a re-wind; draws camu-camu & plum lines in the aftermath
Quality   16.1 / 20
Covendo, Bolivia lies right on the edge of the Isiboro Nat’l Park at ~450 m / 1,500 ft in altitude.

Soria in 1965 noted a cacáo type cultivated for more than 200 years by the local Mosetenes people with the help of Franciscan missionaries in the valleys of the Yungas, the transitional plains in the foothills of the Andes.

These trees may indeed be relics that pre-date the introduction of foreign varieties into the area from neighboring Peru, Ecuador & farther afield from Trinidad-Tobago.

As Dapeng Zhang & Elizabeth Johnsona’s genetic analysis shows, the farther north up the Rio Bení one goes, the less wild the cacáo, though some wild tree stands can still be found in Alto Beni (Upper Beni). Their findings suggest that any wild cacáo growing in Covendo & harvested for this chocolate bar probably originated in the lower Bení & was transplanted there.

While it might be tempting to compare this “wild” Bení bar to Felchlin’s 68% Cru Sauvage harvested well to the south in Baja Bení (that bears much greater fruit definition, especially its pruned accents, some of which can be attributed to the 7% increase in sugar content to this one’s darker brooding dialects of licorice), the closer match would be Covendo’s next-door neighbor: El Ceibo’s domesticated / non-organic 75% pulled from sundry properties in the surrounding area.

Both exhibit rugged Texture – something perhaps about processing at even higher elevation where the co-op takes these beans for refinement after picking the pods off the trees. The textural flaws point to a combination of insufficient conching, followed by overshooting the Temper, veering into Beta VI territory of the cocoa butter’s crystallization, which lecithin smoothes over some but fails to cover up for completely.

El Ceibo, never one to calculate the nutrition panel accurately, stays true to form in listing a CBS (Cocoa mass / Butter / Sugar) of approximately 2:1:1 – unheard of in chocolate circles & clearly erroneous yet it feels about that stiff anyways.

That aside, their two 75s thankfully diverge in Taste. The other one smacks, ironically, of a very low-flying, untamed predator-drone that only nods off when it finally does so... at the very end. This by contrast carries much more natural pitch & better proportion to the flavor.

A bar worthy of the landmark status ‘heritage cacáo’.