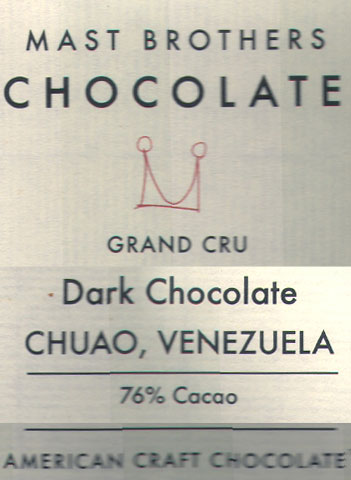 Impact
This bar could be excused for suffering from middle-child syndrome, wedged between its big (81%) & little (70%) sibs.

Hear it shout while being drowned out: ‘thank God for the C-spot™’.

Aroma   8 / 10
primary - twang; secondary – nuts; & lasting tertiary – musk evolves into a quaternary – must... all against a chocolate backstop
Mouthfeel   12.1 / 15
Flavor   45.7 / 50
beautiful blueberry rolling around an oven-toasted chocolate -> coriander -> quercetin-laden Araguany woods -> guarana -> apricot brandy (special) -> chocolate resurgence, this round milder / whiter despite apparition of vanilla -> exits caramellow... to purslane wrapped about golden hazelnut
Quality   18.2 / 20
One of the most even accelerations -- flavor-wise -- for a Chuao from start to finish, picking up increasing accumulation as it melts along.

This middle percentage in the Mast Bros Chuao Suite underwent a medium roast (the others an 81% Light Roast & a 70% Robust Roast). That they roast inversely (& rather counterintuitively) to cacáo-content (the lower the percentage, the higher the heat) somewhat negates the differentials in weight.

One would expect that with John Nanci’s Chuao allotment from Chocolate Alchemy ringing with tanging acidity (just off-center of an ideal fermentation), the darker the roast the darker the fruits (figs & the like). While some of that follows true to form, in the main the 3 bars stay closer to each other, generally lighter & in an upper register, vaporizing rums & brandies.

Sugar therefore becomes the great equalizer (assuming all other processing variables are fixed & the Texture indicates the conches are relatively uniform) in the Bros achieving a certain consistency between them – allowing of course for some varying degrees of power due to their differing potencies.

In the case of the 76% here, its uniqueness compared to the other two lies in excellent hi / lo palate distribution with huge verticals by the end, the result of some considerable stamina & sustain thru-put, virtually leaving nothing behind in its wake, taking all of it along leading up to that tremendous finale.

Why that is can be (partially) explained by proportionality within the grander complexed scheme of chocolate mysteries.