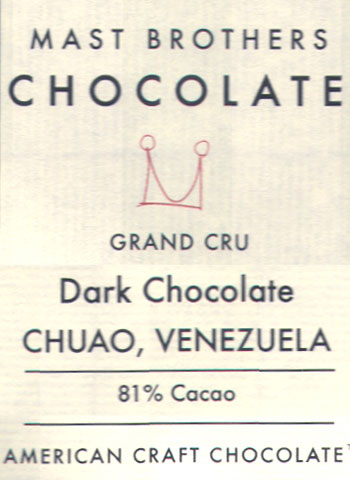 Impact
Nothing half-Mast nor in mourning after this drops victims dead in their tracks, floored by the heaviest – at 81% -- Chuao yet to hit the marketplace & Pals (for palates) everywhere.

Very light-handed technique (a flickering roast matched by a languid conche) leaves it up to the cacáo + a quintile of sugar. And very much in line with the new retro-American tradition; distilling so much spirit to draw parallels to Askinosie’s Tenede sourced from the other side of the globe... a pervading style that ironically narrows the gap between these two origins.

So while this becomes non-Chuao in some respects (or at a minimum unorthodox) & in keeping with the Mast's Chuao Suite (comprised also of the 76% and 70%), it stays rooted on account that Chuao stands in general for singularity. That heretofore unencountered back-stretch -- marked by the phenomenal progression from the olive leaf thru to the orange seed – once more guarantees its unique place among all cacáos & stamp this bar as the genuine article.

The Mast Bros own tasting notes are instructive here. The fact that they can be duplicated from batch-to-batch (no mean feat in artisan chocolate) point to a promising potential: seed consistency & technical proficiency, which would benefit both the label & the wider boutique niche.

Craft chocolate by its very nature encompasses variability (seasonal, seed lots, batches, etc.). The more venturesome embrace it, fully aware of the downside hazards. At least this development could reduce the maddening levels of erratic product.

Arguably the boldest of Chuaos.