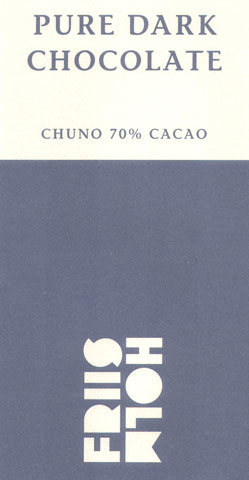 Impact
REDUX REVIEW: Friis Holm in conjunction with Bonnat recently re-issued CHUNO in a dual bar collection set with a single control variable: one bar crafted from seeds whose fermentation pile was turned twice; the other triple turned.

This experiment, conducted by Zoi Papalexandratou who wrote a PhD on the subject, tests the degree to which one parameter effects flavor development. Her work contributes to establishing a fermentation protocol for Frank Homann’s Xoco Gourmet.

2 Batches Side-by-Side… both for fermentation & drying (ditto making the chocolate);
Identical Seed Lots of equal weight / size;
The first couple turns were the exact same for both: All other variables held constant
Total Fermentation Length: 5 days

Turning, in general, occurs during the aerobic phase of fermentation (i.e., in the presence of oxygen) to increase O2 levels which, in turn, decreases the buildup for mold growth & ensures a more even fermentation. It oxidizes alcohol into non-volatile lactic acid then acetic acid (the main component of vinegar). These acids, along with exothermic heat generated during fermentation that can reach 120+ degrees, start the process of slowly penetrating the beans by breaking down their cell walls, permitting enzymes to access the substrates (mainly cacáo proteins), then “chewing” them into constituent peptides & amino acids. This softens polyphenols which, in tandem with the alkaloids theobromine & caffeine, account for much of a chocolate’s bitterness & astringency. Oxidation, particularly on the part of the enzyme polyphenol oxidase, also causes a browning reaction that give chocolate its characteristic color.

That’s the scientific explanation; the insiders’ arcanum for geeking at choctail parties. When it reaches these esoteric levels, it closes-in on the tip of the pyramid of ‘who gives a shit’ because to most people none of it really matters except for how it translates into discernible differences in flavor that can readily be tasted.

So just how does double & triple turning affect flavor?

Well, that depends on the pulp itself. If there are a lot of reducing sugars, the ethanol production by yeast could be quite high. The 1st & 2nd turns (at 48 / 72 hours) will not necessarily convert all the ethanol to acetic acid. A 3rd turn could help facilitate this & therefore drive increased acetic acid formation.

On the other hand, low pulp sugar content means that a 3rd turn would create minimal to nil difference on acidity.

In this particular case the triple-turned CHUNO chocolate is less volatile, more streamlined, & even a bit exhausted. The double, comparatively, shows more assertively, with a sharper tannic finger that later flexes into a soft wood in the triple bar.

Is one better than the other? Yes. But that doesn’t mean generally as a rule, seeing how almost everything with chocolate is situational.

In some respects churning chocolate liquor during conching -- an end stage process at the manufacturing level -- achieves a similar result as turning the fermentation at the early post-harvest level. Both involve oxidation.

And another reminder that just as there are a thousand ways to skin a cat, the same holds for husking a cocoa bean.

What follows is the C-spot’s® original review of the initial CHUNO release from Summer 2011.

Guess how many times it was turned.

ORIGINAL IMPACT STATEMENT: Mikkel Friis Holm is no slave to the grind. He leaves the grinding of cocoa beans to Stéphane Bonnat (the actual maker of this bar) who, being a butter bandit, in turn leaves his paw-prints behind.

Together, they’ve ground up some euphoria to relieve any sweat from chocolate-making.
Appearance   4.6 / 5

Aroma   8.9 / 10
regally reserved: a petit déjuener of moraberry jam on toast + a drizzle of olive oil -> balsamic on the side -> tobacco along the edge wall
Mouthfeel   13.7 / 15
Flavor   44.9 / 50
that sleepyhead of an Aroma wakes up on chocolate fudge -> brief candy flirt -> skids into a bread ‘n cream resort -> nods off on a White Chocolate mousse pillow -> fig on a twig to simulate a Dark-Milk -> light fruit (white sapote / golden berry) -> jicaro (the licorice-like Crescentia alata) -> malabar chestnut -> beautifully soft cocoa tannin evacuates with minor stringency
Quality   15 / 20
Quite Nicaliso-like, its cacáo cousin in another of Frank Homann’s outgrower varietals recovered around northern Nicaragua, except very serene... so subtle in parts that some may wonder if such blandishments are just a tease. They are... to an exalted state.

That this bar’s gentler profile reflects greater Criollo germplasm may instead just be copious, even smothering butter which trims the Taste (including char effects at the fringes from a warm, very Bonnat house-style roast) while bulking the Texture (well beyond the superfluous 5% butter added back, confirming accounts that the natural butter content of cocoa beans in South and Central America for the last harvest has been tremendously high – including one report of a specific seed-lot measuring 62%!).

Additionally, Chuno seeds are somewhat unwieldy due to their relatively small size, requiring extra handling (such as sorting or winnowing to name a few), a trait that feels over-extended to the conch (indicated by the length of the Melt, however sublime its quality).

Lastly, Friis Holm would’ve been better served to stick with Bonnat’s standard 75% formulation to boost the flavor flags instead of the 70% cacáo-content in this bar.

All this taken together suggests that attention to details slipped a bit to obscure any clear read on the genes. So much so the bar draws a Milk Chocolate cast in the mid-section.

Nonetheless, the finery of this cultivar shows up if not exactly shines thru. The rather gauzy flavor embedded in that lush body-melt (excusing the husks) produces a harmonic convergence on the senses that becomes otherworldly... as in celestial.