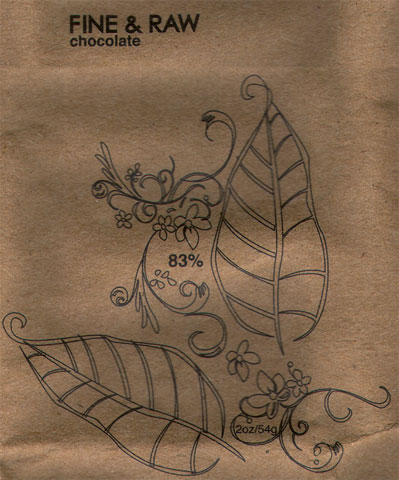 Case in point with "raw chocolate": it has all the virtues that make life clinical (higher anti-oxidants, friendly[?] bacteria, & supposed enzymes) with none of the vices that make it worthwhile (surreal flavor following on seductive mouthfeel).

As a consequence, it moves mainly in the health food world. And now, beyond... & into fashion moda (a sign of imminent demise?). Hell, even the FCIA (Fine Chocolate Industry Association -- a post-industrial oxymoron of its own), bowing to the winds of commerce, holds raw seminars.

So when better to cover raw's catwalking prowl than during NYC Fashion Week? Or as party impresario Kenny Summit likes to say -- the fav time of year to watch malnourished, underage waifs getting blown apart by the lightest breeze fluffing thru SoHo's cosmetic stops.

A keen observer of the scene, Kenny still blends up a tripp mix of tech / electro-soul during his own DJ sets. He cut his teeth in the 2nd generation scratch method of a knob mixer so the new devices feel like autopilot for this MC whose other tools of the trade are a packed club & sound system at 3:30AM when the acoustics pounding forth from the speakers whip thru the room in screeches & howls.

Take this bar along for the hour-long euphoric rise on his July 2011 monster-mash tape; pure peaking... Kenny Summit style. Cacáo's methylxanthines might help keep pace with the polyphonic spree, & its fat content will definitely add a couple much-needed ounces to the frames of runway models vainly balancing themselves before the experience rawks 'em back off their pumps & dominos them into their fellow manorexics.

Chocolate, long the province of female consumers, should attract a fair number of guys now too, whether ripping into a bar during the locker room halftime while getting chewed out by the coach, or as the accessory of choice while sporting a new set of mantyhouse.

And that's just fine because it takes a secure man to feel like a woman.
Appearance   4.5 / 5
If the Mast Bros graduated from the Martha Stewart school of wallpaper-wrapper design, the chintz pattern on this butcher paper can be traced back to Bob Vila peeling layers off the walls in a re-run episode of This Old House just prior to Larry the Cable Guy wrecking the place good trying to install the hybrid fiber-coaxial
Aroma   8.7 / 10
first-rate: shoe leather, tobacco leaf, wood (even a smoked element), spice & sap... pretty well-balanced by each other -> aroma randomizes some on chorizo sausage (this is raw?) & really pulls away as a floral saponin soap bubble washes over strip-cocoa re-finished in nuts
Mouthfeel   10.2 / 15
Flavor   42.4 / 50
internecine civil war between real chocolate & raw cocoa... battling over caramel -> raw edges gain the upper mouth, then win out, & in the course of the melt-thru die out -> leeks (specifically the dirt between the stalks) -> plain like plantain -> breadfruit -> runs flat & rather blank (an absolutely positive development for the "raw" category) to a cream ending; throat-catching cocoa dust down the shaft inflected with maple + natural vanilla
Quality   16.1 / 20
If you can't heat 'em, coin 'em... with sweetness & light (agave nectar & cocoa butter).

"Raw", the hayseed of the chocolate world & usually a staple for pirates who come ashore empty-handed, jars even the most jaded urban consumers with its oft metallic-slag bars.

This beats those bitter blues away with butter, a decoy to mask most of "raw's" customary & objectionable effects. A fat distraction really that vacates a lot of otherwise rawkus flavor (to the aforementioned scrap metal, add sawdust & sheet rock).

Conventional barsmiths utilize the same technique. Another member in the 80% class -- Marcolini's Fleur; or, dropping down a notch in percentage, Choklat's butterballs &, most positively, Friis-Holm's Chuno.

Like the latter, Fine & Raw modulates the butter with the base quite well for a "raw" bar bearing genuine, albeit mostly latent, core chocolate flavor. Rare indeed for the category. Enough to convince, or simulate at the least, of some roasted beans tossed into the batch & Dutched out of the oven &/or cooked up for some time in the conche.

Which is a marked improvement over Fine & Raw's earlier Ecuador -- the 78%. With experience comes better understanding that translates into improved formulations. This may be a tame dark-white chocolate but lesser 83%s from Ecuador can be hazarded (Corazon del Ecuador from Duffy's Red Star when considering it underwent the full massage treatment of a regular processor).

The wider premium chocolate niche has now reached the point that in a couple years of incremental progress it will be hard to find a bad bar out there. For "raw" to achieve likewise will require more of a quantum leap. But this bar serves up a noteworthy harbinger that that day too is fast approaching.