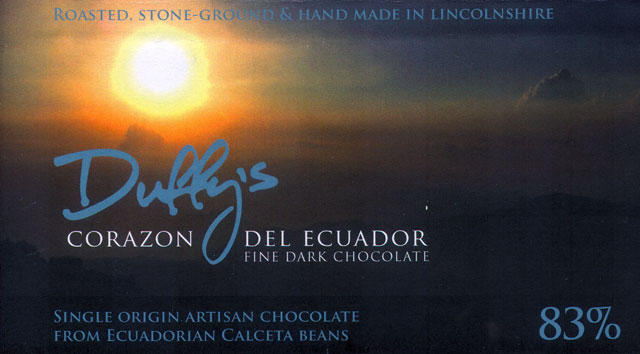 Impact
Confucius says by 3 methods can one learn wisdom: First, by reflection, which is noblest; 2nd, by imitation, which is easiest; & 3rd, the bitterest... by experience.
Appearance   4.5 / 5

Duffy Sheardown of Red Star boldly attempts to shed light into the dark heart of Ecuador (hence the bar name Corazon del Ecuador). Alas, & oddly in concert with Blanxart’s 82% Congo flavor a half world away, the 1% difference in vain.

On the plus side: centralized flavor focuses the experience. And once more, Red Star conjures a chocolate of ridiculously augmented fruit levels; as if raisins were thrown into the mix to impart both flavor & color.

On the minus side: it all goes sickly sweet in a goopy Amedei / Valrhona kind of way. Daring for an upstart to venture into 80% territory. And for good reason: unlike Potomac’s 82% prodigy from a different source, this confirms current notions of Ecuador: secondary & ordinary, even hackneyed.

Whatever considerable precision Duffy brings to the process, talk of roasting & conching can do nothing for a seed type that feels under development.

Indeed, cocoa from Calceta, from where his beans reportedly comes, in the Manabi province of the country, was once known as Cacao Bahia because it was shipped from the port Bahia de Caraquez (not to be confused with the more renowned Bahia, Brazil). Historically, the quality of Bahia de Caraquez (Manabi) cacáo ranked 3rd best among Ecuador's cacáo-growing regions behind Esmeraldas and Arriba (Balao & Machala rounded out the top-5).

Calceta has re-christened its crop of sorts by experimenting lately with newer EET clones to line-up side-by-side with lots of older cacáo stands. The co-op Fortaleza del Valle is really strong here among several groups cultivating cacáo. It contracts with Pronatec, the Swiss NGO committed to removing intermediaries in the supply chain & improve transparency. Good quality overall (happily, almost no CCN-51 -- near the main road at least) & decent enough if not great taste.

The general region however lies an arid zone unsuitable for agriculture. The groves rely therefore on the Carrizal Chone irrigation project in line with an embankment dam.

Likewise this bar tastes a little bit arid (note the dried fruit) notwithstanding the added butter.

Which may explain why Zotter, a tremendously experienced & accomplished barsmith, & no stranger to punishing percentages including 100% unsweetened cacáo-content, elected to go light & easy in releasing only a 50% Milk Chocolate using cocoa from this area. Ditto the in-country firm Pacari which has manufactured 2 Manabí bars of substantial sugar-content: the 65% under its own label and the 60% it private-labeled for Fortaleza.

The much better part of wisdom counsels against scaling such a percentage so early in the game, particularly from this origin, a place nowadays best left for the time being to the candy giants to further burn & churn beans such as these into some standardized formula with ever more sacks of sugar & vanilla than cocoa.