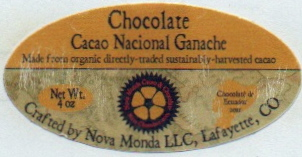 According to RandomHistory.com, due to jobs, kids, TV, the Internet, hobbies, plus home & family responsibilities, the average married couple spends just 4 minutes alone together per day.

What about the night? With reading before dozing off, sleep, dreams / nightmares & quickie sex, it’s even shorter.

In any event, about the same time it takes for this spread to indelibly melt into the memory cells.

O, linger it shall & haunt for awhile afterwards in the department of desires.

The kind of stuff that gives the tongue a good licking while proceeding to blow it off (see Texture below). The stuff guys are eager to trade their virgin sisters for.

Somewhat undefined compared to, say, Ritual's CR with which this shares some common ground despite differences in geographic origin and genotype.

Both barsmiths operate in Colorado & both of their bars are, in a word, charismatic. And this one in particular just charms the wonkas out.

That it displays such dark fruit may point to some possible Nacional lineage, though the overarching flavor lies more reclined in character with Esmeraldas' traditional varietal. Ecuador's northern terroir attributes for some of that no doubt (post-harvest methods inclusive).

As does the addition of copious coconut oil (roughly equal to sugar content at 23%). Coconut facilitates that quick release & melting point in the Texture, generating a cool mouth; quite distinct & pleasurable in the main, yielding up that eucalyptus moment, then carried forward to the end for a phantom floral that might confirm its Nacional heritage (albeit rather obscure).

Perhaps a classic example of 'hybrid'.

Classifications aside, a top line chocolate. The only caveat: it happens so fast that it leaves T-buds (for Taste) lusting & drooling in its wake.