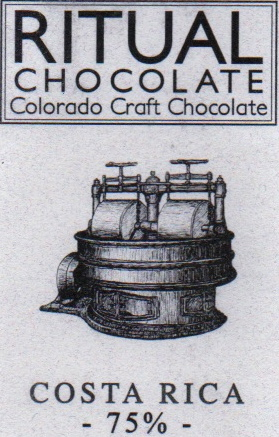 Impact
Everything has its ritualized aspects... every season (Le Sacre du Printemps for instance by Stravinsky), religion (baptismal, betrothal, & burial rites) or even the quotidian (the morning cup of coffee, checking the newspaper/tablet, & brushing the teeth). All deal with the practical passages of production -- whether theatrical or manufacturing -- that take on a rhythmic, almost hypnotic, pulse in which the extraordinary becomes very ordinary & habit-forming (Ritual de lo Habitual to use Jane's Addiction).

People nowadays take chocolate for granted, just like a bloated chicken in every pot & two cars in every garage. Largely ignored in the frenzy to consume it is how chocolate derives from a tree, requires manifold incremental steps, each as important as the next in the processing chain, & once served as the sacrament of a bygone civilization.

Ritual now leases the space & uses his equipment. It likewise follows in his footsteps to source this inaugural bar from Costa Rica.

Unlike the early De Vries Costa Ricans that were heavily soaked in balsamic & brined olives (basically vinegar for the wine 'n cheese society), or even Escazú's spiced-laden Guapiles from the same property (& probably harvest), this comes much different. Thanks, in part, to a spare formulation of cocoa mass & sugar & nothing else.

Yes, there's a nod to the balsamic & herbal spice. But the persistent berry tone runs virtually the whole length. It holds this bar together which hovers precariously on the verge of downside Brut(ish). So much so that except for the dark hue of that fruit, its innate sweetness almost qualifies it for Semi-Dark, despite only the 25% sugar content in this bar.