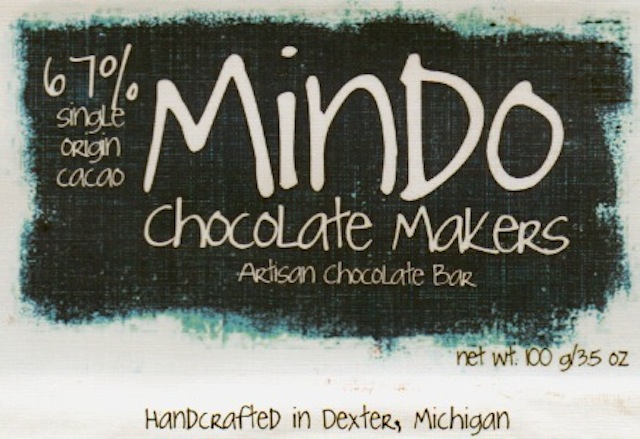 In response to why that is, she resorted to instinctual preferences, "I like it more", followed by a cliff-hanger, "It has more..." .. more what?

At the risk of completing her thought... well, more definition & clarity (however streamlined).

She said so rather apologetically, even sheepishly, mindful that in her position & in this age of macho-cacáo when every sui-serious Darksider strives to out-prove themselves with ever more punishment by gorging on the highest percentage bars possible (in the 80%+ class), it takes real cajones & courage to go against the grain (grain, which Texturally speaking, this bar has plenty of) in stating the obvious: what a cute Ecuadorable bar.
Appearance   3.5 / 5

Aroma   8.3 / 10
2012:
draws a blank... almost unprecedented in the annals of chocolate... flat out nothing until a dusty smattering of white pepper -> opens some to expel its storage conditions (a little mold, jute sack, cement) -> then more traditional Ecuador appears (blackberry-ishpingo) mixed with grains / starch (especially cassava)

2014:
very related to its 77% sib except more controlled formal restraint… wooded (recessed eucalyptus) / grounded (top soil & flintstone) without any acetic acid or rubber… & then ishpingo-tea which diffuses blackberry char in a rare stunner together
Mouthfeel   11.7 / 15
Flavor   45.2 / 50
2012:
good & nutsome blast of cocoa -> meters down & dilute toward whitish fruit &, here's another first for chocolate, water -> nuts rebound (filbert / almond blend) but no getting 'round the simple if husky cocoa -> banana, in a cross hatch to that earlier white fruit -> substrate chalk / cardboard in the aft-length

These seeds need help... lots of help from lots of sugar.

Yes, sugar -- the one "legal" additive which purists among the cocoa-mafia deem acceptable to still qualify as "pure chocolate" after "banning" vanilla, lecithin, & even cocoa butter. (Note to The Syndicate: chocolate is an unnatural compound with respect to its being a human invention unfounded in nature).

Even so, sugar can do only so much here. Mindo makes a wise choice to add 10% extra to their fraught 77%.

Direct-trade / direct-action chocolate as the manufacturer in Dexter Michigan has cultivated contacts & a stake in cacáo properties around the Mindo area of Ecuador.

Ridiculous levels of expressed blackberriness, practically unprecedented in scale & volume. Little-to-nil stringency that so often marks Arriba-type cacáos; ditto bitterness. The ponderous, irregular melt merely distracts from the main event -- Flavor -- in a peripheral sense. And in this respect, the original Heirloom exemplar surpasses Mindo's due to Guittard's roll mills that pulverize particles to a finer micron size. That one also covers a broader spectrum of the Flavor Wheel.

But those looking for a good gobsmacking, Mindo 67% rates as the 'go-to' bar for this seed lot in the Semi-Dark range.