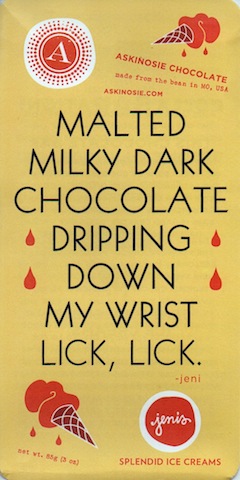 Impact
A food bar, Askinosie-style, in heeding Hippocrates’ 'let food by thy medicine & medicine thy food'. With its battery of ingredients -- phenol-rich cocoa mass, the once-magically esteemed sugar, cocoa butter (a wound healer), plus malted milk -- it could even be a whole meal replacement.

The last ingredient was patented by London pharmacist James Horlick in the 1880s as a nutritional baby formula. Some also liken it to a sleep aid. He came to Chicago to commercialize it. From there it went on to fame in soda fountains & malt shops, eventually making its way all around the world. Included among its stops: Antarctica inside Adm. Byrd's rucksack to help fuel his expedition & Jeni's Splendid Ice-Creams in Columbus, OH who provided the malted milk in this confection as part of Askinosie's CollaBARation series.

Incredibly enough, GlaxoSmithKline, the pharmaceutical giant whose prescription drugs run the gamut from digestion to cancer, currently owns the Horlick™ brand. It could do well to step back & re-valuate the mix in its portfolio.

Considering that plants & herbs have been humanity's pharmacy for thousands of years, food is really the conventional medicine while modern medication is actually the alternative medicine. show more »show less «

Ok, cayenne & broccoli may not cure tumors with any certainty. Then again, chemo & radiation don't either. The current stats on cancer are mostly pretty grim.

In the 40 years since Nixon declared "war on cancer", the country has spent over a trillion dollars. The cancer wards, with few very specific exceptions, have little to show for it. Cancer today rivals heart disease as the #1 killer of Americans. Chances are, any real breakthrough will probably occur by happenstance or accident, instead of by any systematic program. The current approach seems about as successful as the "war on drugs" (ironic in that the DEA should be raiding hospitals & doctor offices that overprescribe dangerous chemicals instead of arresting campesinos & defoliating 3rd world countries). Both wars are a bust.

During the recent Supreme Court hearings on the supposed Affordable Care Act, even the counsel arguing on behalf of the White House acknowledged that an inordinate amount of funding -- upwards of two-thirds of all dollars spent -- is dedicated to end-of-life-care, those sad 6 months or less before death. In other words, for treatment that fails to extend life appreciably beyond a few weeks or months at the expense of quality of life. Scandalous.

Once "conventional chemotherapy" came right out of the forest. Only in the past 20-25 years or so have modern meds been engineered in laboratories. These isolated agents patented into drugs are often lethal yet administered anyways. This problem becomes compounded by iatragenic diseases (ailments caused by doctors thanks to misdiagnosis, mismanagement, viral & bacterial-infested facilities, & generalized poor, unsanitary conditions) to near epidemic levels.

Anyone but the blind can see that hospitals… errr, correction… "medical campuses" replete with all kinds of amenities from spas to 5-star restaurants, shopping malls & entertainment complexes for kiddies & able-bodied visitors alike, are mega-lifestyle centers open for big business. Meanwhile, patients languish on the upper floors in a personal horror show.

True story: while visiting a person who had been bed-ridden in a hospital for over 2 weeks, one of her relatives tried to open a window so she could get a breath of fresh air. All windows in the unit on the floor were bolted shut, impossible to open up. Why this is? The nurse on duty said for insurance purposes; that a former patient once jumped 42 stories to their death in order to escape their medical confinement. Quite a rational decision really when thinking about the reality of most hospital settings & outcomes. With the spate of clinical trials, too many patients add up to mere guineas to fill databases charting experimental drugs.

In short, hospitals are disease management factories rather than wellness centers.

When humanity looks back on this era in the future, it will be viewed as primitive, right up there with bloodletting from the Medieval Period.

Isolating compounds & stripping them away from their native constituents can be quite ignorant because doctors have only a vague idea, let alone understanding, of the intricacies between compounds in their whole plant state &, furthermore, their combined interactions with human biology.

Take for example chocolate's reputation as an aphrodisiac. Science debunks it, saying that the responsible compound, the so-called ‘bliss chemical’ anandamide, is detectable in too scant an amount in any chocolate to make a difference on the libido. Of course this ignores the roughly 800 compounds that make up cocoa & how anandamide potentially interacts with them (especially with other elements contained in chocolate like serotonin & phenylalanine) & what their aggregate effect on the body might be. Anyone who has ever sipped or bitten some high percentage Dark bar around midnight knows that it helps immensely to drive the bio-engines faster, farther & firmer as well as lasting longer.

Hell, even the fiercest conquistadores recognized its powers.

The chocolate-sex link the West's entree into it when Conquistadore Bernal Díaz Castillo witnessed ceremonies at the Mexìcâ / Aztec court in 1519. Later he would write that "from time to time, the men of Moctezuma’s guard brought him, in cups of pure gold, a drink made from the cacao-plant, which they confirmed he took before entering the harem."

Whether truly possessed with aphrodisiac powers or not, chocolate along with his consorts of the night surely pre-occupied the Tlatoani ('Emperor') long enough for Cortés & a small party of overseas tourists to occupy an entire empire for centuries.

Let skeptics demur & call it the ‘placebo effect’. Dr. Stephen de Felice, an MD specializing in endocrinology / metabolism, & founder of the Foundation for Innovation in Medicine, coined the term nutriceutical back in 1989. He says the "placebo effect is real... And it works".

A clinical study reported in the NY Times recently concluded that placebos & pharmaceutical drugs are equally efficacious: 50% percent of the time they work, 50% of the time they don't. A statistic which, according to Dr. George Carlin (with a doctorate in comedic arts), approximates as the same rate of return on prayers answered by God.

The take-away: Obamacare or not, do not get sick &, if you do, think twice about being admitted to a hospital. They are generally unhealthy, anxiety-inducing environments that are far from conducive to healing let alone wellness. Moreover, they prescribe agents that are way over on the poisonous side of the Caduceus & administer them as freely as water.

Avoid them if possible & keep doctors to a minimum or at bay. When necessary, demand the very least they have to offer. Letting doctors find their mortgage payments & children’s prep school or college tuition from someone else invites less trouble.

And every so often have a bar like this Dark-Milk Chocolate with Malted Milk. It tastes quasi-medicinal enough.
Appearance   4.3 / 5

Aroma   8.6 / 10
big fat raisin, unseen since the earlier days of Valrhona -> only gradually & secondarily some malted wheat-wafers appear
Mouthfeel   11.4 / 15
Flavor   32.7 / 50
as foretold in the Aroma... protruding raisin -> malted mash comes on & completely mortars it... lots of grains (barley, wheat, corn & rice too)... drastically compromising the length by shortening it -> sorghum syrup with slight maple edge -> caustic endpoint: soda... as in baking soda (if good medicine requires some bitterness, then this qualifies)
Quality   12.5 / 20
Malted Milk contains powdered milk along with malted grains. The most popular brands of it -- Horlicks™ or Ovaltine™ -- typically incorporate malted barley &/or wheat. They're germinated by soaking them in water. The process develops enzymes which breakdown the proteins & hasten the conversion of starches into sugars.

Here those malted milk grains taste more starched than sugared, then overshot in the recipe. Cocoa feels lost in the soda jerk of it all (& a great cocoa too: Askinosie's Tenende).

The 3rd in Askinosie's CollaBARation series & nowhere near the craft of the other 2 (Coffee or Licorice).

A malpractice suit & a pity; not even a Whoppers™ malt ball for kids stuff.

No worries because kids nowadays... well:

That spells they're alright.