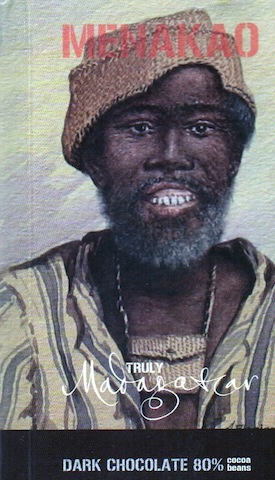 Impact
What slides in a wooden "Madacasket" to turn the gas on at the crematorium, then rings the bell & ends up an enlivened ghost drifting amidst the ashes... above the flames
Appearance   3.7 / 5

Another D.O.A. bar from Menakao

Aroma   8.6 / 10
dry cake batter for some spiced nut-bread sweetened by juice concentrate -> cup of orange-pekoe tea on the side, please -> perfumes out to ylang & vetiver
Mouthfeel   13 / 15
Flavor   41 / 50
prefix on citrus vines & branches, immediately over to good wooded caramel -> mol-ash-es (i.e., roasted evidence of charred molasses), maintains this down-bent cast despite back-souring occluded / embalmed in cocoa butter which brings in a cream-tone disguised as Criollo -> settles to gin 'n tonic (quite nice & reposed), the alcohol adding fuel to the fire as bituminous coal returns to smoke & cloak some grapefruit -> latent hazelnut in the retro-olfactory
Quality   14.3 / 20
Just as the political meaning of liberalism & conservatism have switched sides in the last few centuries, so too chocolate styles when it comes to Madagascar.

Originally, bars from this island exhibited soaring brilliance. Then it darkened considerably as barsmiths sought to brand their maker's mark on the cacáo from here.

In the great divide that separates barsmiths who approach this origin, it is the experimental school that nowadays applies a light touch to let Madagascar's berry-laden cacáo sing in those upper registers, while the traditionalists go heavy-handed to balance those highs with some foundational base notes.

This face-off further sub-divides between, loosely speaking, the English parts of North America (Patric, Amano, Soma) & the Euro-French (Pralus; Richart; Marcolini). The latter usually boils it down to hi-heat; the former a gentle tact for citric preservation.

Menakao elects to fire away in the neo-tradition & yet almost miraculously still retains some volatiles in the flavor bank ala the retro-classics due in large measure to a higher than average cacáo-content. (Confusing? Well, to those who don’t understand our reviews, we understand you.)

Bet too that this batch probably contained variably-sized beans. The smaller ones getting torched while the large held onto their esters to contribute to this chocolate's vibrant acidity.

In so doing, Menakao splits the difference between the two camps to stay in kinship with its compatriot -- Madécasse 80%.