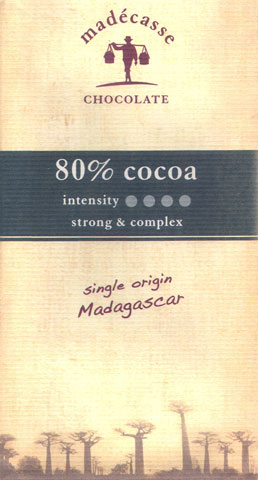 Impact
A bar from an enterprise -- its message, ethics, & contents therein -- to epitomize if not define the best in the new era chocolate.

Some years ago Madécasse stood as an argument for a chocolate abortion in Madagascar & re-colonization of the cacáo groves there. Where Euro & American barsmiths crafted magnificence with cocoa from good Madagascan harvests, & even passable stuff during lame ones, this label served up detritus throughout.

Madécasse, a social venture conceived by Brett Beach while stationed on the island during a tour as a foreign-service officer for the U.S. State Dept., now stands at the forefront of a movement. No mere vazaha (local Malagasy term for ‘foreigner’), Brett integrated himself into the culture. Today he leads a drive to develop the label that practices more than putting its money where its mouth is, but also works where its heart’s at.

Everything in this bar hails from Madagascar & all the hands on the ground who planted, produced, processed & packaged the cacáo into cocoa into chocolate have a stake in the outcome.

A genuine value-added project made entirely in country of origin that creates, as the wrapper reminders consumers, “4x more income than fair trade”.

(A steal too at US$4.99 for 75 grams -- & that ain’t even at Walmart™. So after doing the economic math from retail backwards to the source, including distribution, freight, packaging & marketing, Fairtrade amounts to... what, a 25 cent quarter? What does that buy? An afternoon’s worth of bug spray in the tropics?)

The brass at Madécasse tout how this chocolate derives “from the top 1% of the world’s cocoa”. Such hyberbole often smacks of the usual propaganda printed on wrappers these days. It could merely be attributed to the crush of enthusiasm that this bar must’ve caused back at their headquarters except it emboldened them to take an unusual step in global citizenship.

In an age where consumers demand transparency because too many chocolate companies still play a game of hide ‘n seek among the cacáo trees when it comes to their DNA, Madécasse facilitated the transfer of 40 specimens from 3 estates in Madagascar under the auspices of the FCIA (FIne Chocolate Industry Association) to the USDA Beltsville lab for genetic testing & analysis. Selections came from a central location near Anjiabory village plus 2 corners of a quadrant covering about 20 square miles.

The results, to be publicly released today, solidify that Madagascar hosts an abundance of special gems among a cultivated array. Yes, the diversity includes plenty of morganatic crosses & hybrids making it into the island’s gene pool. But the degree of homogeneity, or consistency, in certain samples startled geneticists Dapeng Zhang & Lyndel Meinhardt. Specifically, some trees bearing pure Amelonado & others ancient Criollo (even a handful nearly identical to the baseline reference or bulls-eye match for the genotype -- Criollo 13). Their preliminary assessment traces the origin of these genuine types to, speculatively, Central America. (West Africa, whose cacáo production is built upon a foundation of Amelonado, is currently being ruled out since very little purity of that cultivar has existed there for some time.)

“The top 1%” may still resound as a bit of a stretch considering the treasure scattered all across the equatorial 20/20 cocoa belt. And while 40 leaf samples hardly comprise the whole of Madagascar’s cacáo estates & caution should be heeded about extrapolating the results, such findings will encourage a broader survey as well as provide material to nurseries in Sambirano Valley for “designer-cacáo” propagation. Further, the beauty of the island lies in its isolation, surrounded by water that provides a measure of protection -- though by no means an impermeable barrier -- from disease & foreign introductions; literally a safer harbor for species conservation.

All this should translate into improved chocolate, a point raised simply because little of this really matters to consumers unless flavor commensurably measures up.

So, finally, in terms of taste, Madécasse 80% nicely reflects its heritage. It includes an admixture of cacáo types to create, as Brett likes to say, “a rainbow of flavors” that one type alone might lack. It also represents a quantum leap in quality for the label.

And they vow that better is yet to come.

This should temper the naysayers with humanity's rediscovery of chocolate glories.

The Lay of the Land in Madagascar... as of Monday, July 11, 2011: a genetic map plotting MA (for Madagascar) onto benchmark referents contained in the Int'l Cacáo Database
Appearance   3.6 / 5
protected in a Ft. Knox of gold foil
Aroma   8.2 / 10
just bangs on the tang... thick, heavy ferment... every citric fruit in existence: lemons, limes, grapefruit, mandarins, kumquats, pomelo... total drippy wet soursop -> throw in a handful of berries... with time & air make that a basket... no, a bushel in a barrel -> next comes caramel & musk -> perfumes out to ylang & vanilla orchids; promises quite a ride
Mouthfeel   12.4 / 15
Flavor   44.9 / 50
wooded sour-sop + an underside of filbert -> dark chocolate gianduia until pink grapefruit bursts thru along with lots of whites (lychee, lime, peach, pear) -> dry gin ‘n tonic while hazelnuts stay on it -> flushes out tart cranberry -> teases slippery elm & marshmallow in the after-length
Quality   17.6 / 20
Significant improvement for the label from even a couple seasons ago. Their most daring percentage yet – 80% -- exposes them, placing the onus squarely on the beans. That they cultivated & selected well allows for less sugar.

Quite opposite Madécasse’s past vintages that sacrificed traditional Mad citrus for deep roasting.

This too roasts fairly strong (hence the solid nut-inflections in the base), though ably compensated by a super ferment. Just lays the ferment on, wood included. Feels of weeks (rather than the actuality of several days) & some very wet beans sent to the manufacturing plant.

The net reflects a CBS (Cocao mass / Butter ratio / Sugar) of 2/2/1: excellent hi-lo symmetry... vibrant upper register fruits tied to a surprising ballast for this island’s cacáo that maintains stamina throughout the entire length. With Madagascar it’s usually one or the other (the top-heavy Patric vs. the bottomed-out Marcolini). Rarely does the origin deliver both. This one does.

It also presents a nice compliment to Madécasse’s other recent success in the more elaborate Milk Chocolate format.

A couple more bars like these, priced such as they are, with genuine pedigree instead of propaganda, & Madécasse just might put a few of their bean-to-bar competitors in the West out of business.