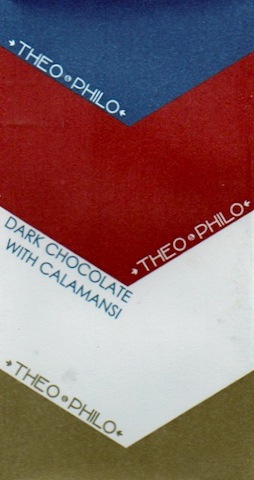 Impact
Truly beautiful are those who are not afraid to seem ugly.
And truthfully this is one fugly-looking bar but however battered, bruised & beaten its appearance, the character within is anything but.... dark chocolate meets calamansi -- aka 'the golden lime' -- in a citric exciter for some sprite bada zing bada zang.
Appearance   2.3 / 5

Aroma   7.9 / 10
self-same countenance as Theo & Philo's plain Dark (dusky / leathered) except citrus cuts thru with a sharp kick
Mouthfeel   12 / 15
Flavor   46.4 / 50
dances out immediately on citrus-covered chocolate & beautifully unwinds from there, almost in a candied leap, until mocha adds gravitas, pulling the brightness into some depth with a roasted marcona almond dimension (1st rate) -> moves forward to a charred Oreo® / cocoa-dust contra whole bits of calamansi zest (tremendous juxtapose) -> clears away orange-lime of sweet ripeness
Quality   16.3 / 20
Based solely on appearance, calamansi -- a hybridized fruit innate to The Philippines -- could be mistaken for a tangerine. Its peel is sugary & pulp quite tart for a natural 'sweet 'n sour' combo when taken together.

Just the ticket to shake the doldrums out of Theo & Philo's couverture & galvanize it into this lovely bar.

Along with T&P's Pili Nut & Pinipig, this showcases the indigenous produce of the islands where Theo & Philo hones its craft with a native understanding of and sensitivity to the local ingredients. Both bars demonstrate complementarity rather than contrast -- the Pili paired with Milk Chocolate; the citrus here matches up with Dark, with which it has great resonance. Had T&P reversed it the other way around, one element might've easily swallowed up the other (depending on the proportions, of course, between the ingredients).

And despite standing off from the rest of the texture as chewy juju bits, Theo & Philo nicely folds & balances the flavor of calamansi to render some fruit into a chocolate that on its own hints at but never really articulates much without it.

Well-tailored to say the least.