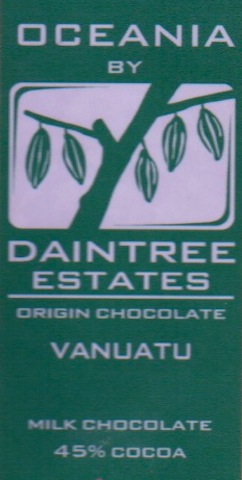 Impact
Daintree ventures outside the confines of its country & vertical-integration model to source the cacáo in this Milk Chocolate from Vanuatu.

It signals that, along with Cravve, Bahen & other barsmiths, Australia sits poised to be the prime driver in cultivating cacáo culture around its backyard -- the South Pacific Islands comprising Oceania -- a zone heretofore underdeveloped (excluding Indonesia) when it comes to premium chocolate.
Appearance   4.3 / 5

Make no mistake though: that chalk tail indicates that this probably shares the same or similar seed allotment as the Cravve bar from this origin. If so, Daintree wisely smothers those seeds up with copious vanilla & a generic stock milk powder. In other words, a smart mishap.

Combining the ingredients then becomes mere assembly. (Note the unusual absence of even any caramel impressions, an achievement which requires a different sort of craft.)