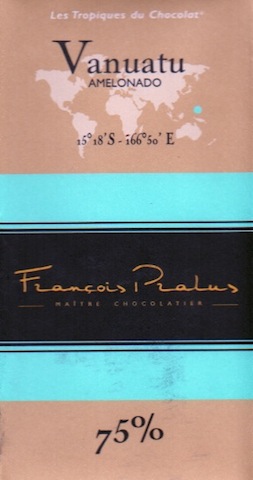 Impact
A milestone in the annals of chocolate?

For the longest the cocoa industry has been held hostage by candy &, for the premium sector, single-origins. The former since Dutchman Coenraad Johannes van Houten patented the hydraulic press separating fat from roasted cocoa, then treating the resultant cocoa powder with alkaline salts. And the latter from about 1984 when Valrhona introduced its Cru line.

Recently genetics, the fundamental seedbed of chocolate, is once again garnering attention after, arguably, a millennium of neglect (or at least a couple centuries). The Maya who brought chocolate culture to its zenith were master breeders, domesticators &, dare say, geneticists. Their great legacy of fine flavor -- Mesoamerican Criollo -- attests to that.

In the modern era, recovery expeditions such as Marañón Canyon Chocolate of genuine Nacional in Peru and the generalized portfolio of Domori cultivated at Hacienda San José in Venezuela literally represent the fruits of this re-ascendency of cacáo genetics.

Those two examples, however, are rather easy pickings because there was an acceptance & consensus level about them that fit within the known classification scheme at the time.

Then came the landmark study by Dr. Juan Carlos Motamayor in 2008 which upended conventional wisdom. In it he reclassifies cacáo into a dozen or more subclusters rather than the old simpler handle of Criollo - Forastero - Trinitario (with Nacional considered more or less a 4th). His work stands on the shoulders of earlier research. Particularly Dr, Basil Bartley's sweeping overview The Diversity of Cacao & its Utilization. Indeed, Motamayor's use of advanced technological testing (DNA fingerprinting with satellite markers & SNPS) largely confirms Bartley's earlier conclusions based on visual identifications.

Four years on & very little has been done to capitalize on this new understanding; specifically applying it to nurseries & propagation programs that would broaden the spectrum of flavor derived from Theobroma cacáo trees whose seeds are responsible for every chocolate bar ever made.

The upshot would be a greater rainbow of chocolate flavors.

Maybe this bar will serve as the clarion call.

Wedded as Pralus is to the single origin categories for marketing reasons, upon which he built his grand tour tasting pyramids, this too spotlights that fact: the name of the bar afterall is taken from where it hails -- Vanuatu. But ever so quietly, in practically hushed tones, Pralus manages to slip in a small shift that could be tectonic. For underneath the bar name Vanuatu appears in smaller print the term Amelonado (click bar image on the upper right to enlarge).

Amelonado is one of the primary clusters broken out from the erstwhile catchall Forastero.

In the past several barsmiths have called attention to cultivars -- many just exotic trade names with limited genetic distinction -- from Amma Diego Badaró's Parasinho and Xoco's Indio Rojo to Claudio Corallo's Cacáo Monka (most of these ironically are Amelonado rechristened). Or the plethora of Chuao which fills in as both an origin & a quasi-cultivar.

None to date have seized upon Motamayor's nomenclature. The closest might be Frederick Schilling prior to selling Dagoba to Hershey's with the release of the Milagros bar that abandoned the use of 'Forastero' for 'Amazon'.

True, chocolate insiders bandied Amelonado about for years. This genotype even forms the basis of about 70% of the world's cocoa supply out of West Africa.

No one marketed it as such though. (Just the opposite: for years most thought anything but Criollo, or that other catchall 'Trinitario', to be dirt.) Pralus deserves credit for embracing a new system & for bringing greater definition to the marketplace (cacáo enjoys so much diversity that the old handle is an insult to nature).

The Heirloom Cacao Preservative group under the leadership of the FCIA, USDA & Guittard Chocolate Company -- with the C-spot™ as a participating member -- will be conducting rescue & recovery missions of cacáo's great treasures.

Taken altogether in conjunction with other developments, might the age of Science-Chocolate be upon us?
Appearance   3.8 / 5 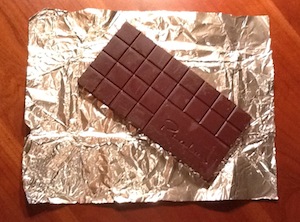 ostensibly a hunk of a 100 gram bar -- outsized by today's teeny-weeny standards -- any guy who could pack a piece with this length & girth would feel quite satisfied
Aroma   6.2 / 10
typifies Pralus: shoe leather, tobacco 'n smoke -> unappetizing tar... roasted within a whisker of its life
Mouthfeel   13.3 / 15
Flavor   44.1 / 50
in character with the Texture: fudge -> white acid streak to a light pawpaw papaya -> plain bitter (ala the whitewood Endospermum medullosum) -> turns more true to the Aroma (smoked cocoa / leather / tobacco) -> gets vegetal & nutty -> limestone
Quality   16 / 20
Past vintages of Pralus Vanuatu amounted to an oddball mess.

With this & the Tava/Journée's release from the same country (though different islands in it), the origin straightens up considerably to point to vastly improved post-harvest techniques on the ground.

One aspect has changed little: many a harvest in Vanuatu ends up kiln-dried. Add Pralus' penchant for high-fired roasts & the combined effects produce a lot of smoke.

And for those now inured to the new spartan chocolate scene of bars formulated from seeds & sugar & nothing else, this marks a return to Textural romp in the form of added cocoa butter & that plumping botox agent lecithin. Both of them round the edges & soften the Flavor profile substantially -- adding bulk & volume while simultaneously toning back its 75% weight.

A good straight-on chocolate of hi-CQ (baseline Chocolate Quotient free of many nuances), quite kind (nothing really charring about it) considering all the heat these seeds have been subjected to.