Milk of the Gods 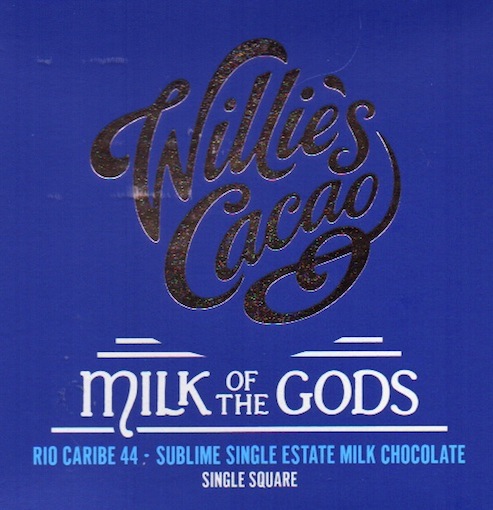 Impact
Sometimes the novelist Keith Gandel has a dirty mind. It goes with the territory. So too apparently Willie Harcourt-Cooze. Both inform this review.

Consider how radical Milk Chocolate must've been when first conceived. Europe emerged from centuries-long debates about cacáo as 'food of the pagans' before it became that of the gods. To reach such exalted status, it passed thru an intellectual medical filter (then the province mostly of alchemists). The thought of marrying it to wedding-white milk -- the stuff of substitute motherhood -- amounted to black, or in the case of chocolate, brown magick. Emotionally a step away from pentagrams & animal sacrifice. An inexplicably cool but dark unknown.

Seriously, what kind of image is someone named "Willie" conjuring up here?

Let's face it: chocolate rivals sex in some respects. Many note its very oral mouthfeel because cocoa butter stakes out a sensuous melting point right below body temperature. Enticements & anticipation makes for another comparison. For instance the celeb party game of 'who would you rather' only to find out once in bed that it turns into 'rather not'. Reality can play cruel tricks like that.

It'd be a stretch to call sex with this milk goddess everyone's BF (gotta pay for it after all). Therefore, just classify Willie within this 'chocolate-in-context' as a mattress pro. Even if he suffers from dishonorable discharge.

That they're breathing a hopeful sigh in the cacáo groves today in Venezuela -- the source of the cocoa in this chocolate -- doesn't mean Chavez was all bad for the country. And neither is this bar.
Appearance   4.6 / 5

Aroma   9 / 10
conspicuous absence of vanilla (no caramel twisting or peanut snickering) leads to a nut-house spilling out of the mylar wrapping
blanched almonds, macs, malabars, cashews &, yes, mild cocoa nuts
milk serves simply as a condiment so far, rather than a fully paired partner, though eventually it aerates to whipping cream levels
Mouthfeel   10.9 / 15
Flavor   37.2 / 50
heavy malt over latent caramel -> salt-spark helps to depress the perception of sweetness -> slow gradual dissolve & peters out a Milk Dud® -> macadamia catches a lump in the throat down the shaft
Quality   14.8 / 20
-- Virtually no evolution save for very tip at the end.

-- Projects scant traces of the dark noble traits found in WIllie's Venezuelan Black, the 100% unsweetened parent to this offspring, other than the early onset umami that savors thru the length & labors thru a tough Texture.

-- Avoids the tainted milk disaster of another Venzy-Brit bar -- Duffy's Ocumare. Where that's ordinary, this is just plain.

A Milk Chocolate for mere mortals.