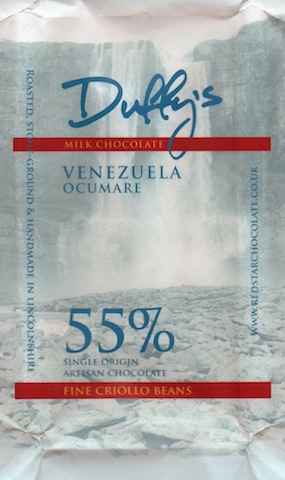 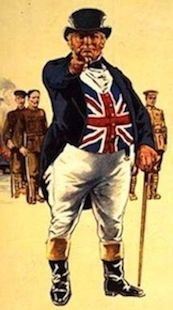 The UK has John Bull, its equivalent to Uncle Sam in the USA.

This bar is John Bull(shit) triumphant.

Tastes of wanting to close early to go home & play with the kids.

Now wifey can gag him with this while he grunts his impotent alibis.
Appearance   4.6 / 5

Aroma   8.8 / 10
strange for even a Dark-Milk; nary any dairy except for subliminal buttter-cream softening a tannic skin into supple leather, & roasted cherry (not black cherry but smoked cherry)... very clean, clear & concise next to so many in the category that amount to spilled chocolate milk (the key ingredient: vanilla... or lack thereof in this formulation permits such transparency) -> tell-tale Ocumare spice on the fringes
Mouthfeel   10.9 / 15
Flavor   37.6 / 50
slow release... biscuits, cream & caramel -> turns dark / heavy to a bitter almond toffee -> waxes up for awhile & hits the skids by slipping on butter... stalls then crashes into malted fat -> gets back its bearings with a umami moment (nice) & the bar is on again as underlying / undying cocoa asserts itself -> that red fruit foretold in the Aroma appears as charred cherry at the rear recesses -> empties ash, soot & caustic mildew / sour milk (the former a roast byproduct; the latter a milk powder problem)
Quality   14.2 / 20
Strives mightily to pull off the ultimate equilibrium in the Dark-Milk class; one to satisfy regular Milk Chocolate lovers & hardcore Darksiders only to end up alienating both camps.

The Dark and the Milk alternate their currents separately rather than blending together which places this bar several leagues away from tops in the world... no where near the heights of, say, Patric Dark-Milk to name just one.

This takes Ocumare's inherent cream tones in the hopes of magnifying them by adding milk powder to the batch while preserving this cultivar's underlying chocolate character. As such, Duffy calculates thoughtfully -- an upper middle strength 55% -- to overcome the problems which plague another Ocumare Milk Choc, albeit at a much lighter 30% cacáo-content weight, by Amano.

But hasty or at least faulty implementation holds the bar back.

Duffy probably added extra cocoa butter less as a taste prerogative & more for its leverage on viscosity, to allow greater flow characteristics / workability. It gums up the works anyways & retards if ultimately releases the flavor.

The heavy-handed roast, first gleaned in Duffy's serviceable dairy-free Ocumare 72%, cuts thru the wall of wax here by the end but at the expense of Ocumare's finer flavor tags -- the much-promised almonds / banana / raspberries printed on the wrapper's liner notes that barely materialize -- only to catalyze a milk-funk finish. So add suspect milk quality to the woes (or perhaps a feint at lipolysis -- the defining trait of Hershey's® Milk Chocolate).