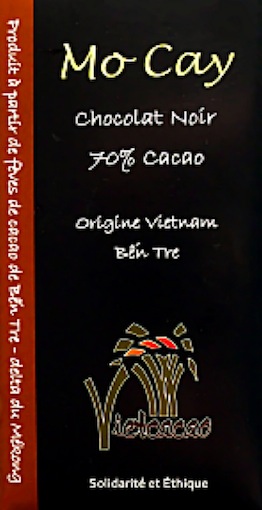 Impact
So sweetly hypnotic to mimic the box jellyfish swimming the waters off Vietnam whose suckerpunch sting is only detected well after its venom has been injected.

Box jellyfish deliver their potent serum via tentacles that contain about 500,000 cnidocytes each -- harpoon-shaped syringes.

Vietcacao sources the cocoa directly from Ben Tre Province & then subcontracts the processing to Franck Morin in France for private labeling.

Morin manages to hold the fruit aspects in a juicy streamline shot thru the length, whereas other Ben Tres just spill all over the edges. In fact, once this bar hits mid-stride, all the flavor points stream in near equilibrium; less pronounced than some other Viets but better poised with greater symmetry.

It cuts a composite of S-B's take on this origin crossed by Marou's Tiền Giang (the latter from another region of the country), & narrows their differences in a way that surmounts Grand-Place's attempt.

Of the small but growing class of chocolate from Vietnam, this stands as the Ben Treat of them all.