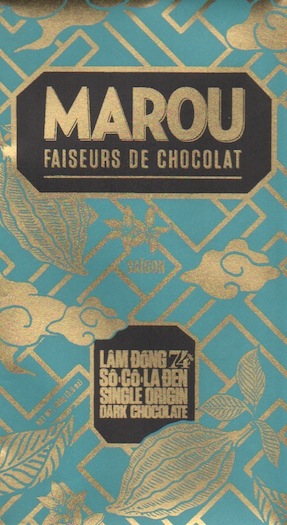 Or try the weirding that can result when science transmogrifies &/or genetically engineers, Dr. Moreau-style (not to be confused with Marou-style), different species together. Such experiments go way beyond Jurassic Park. They're positively crazy unless one is a mad, or just wants to play God. But perhaps humans are supposed to co-create back the world they have stripped of biodiversity.

From all that can be gathered however, Marou chooses to re-create the time-honored old school way.

In their own words, they believe hyper-development contributes to the "loss of wildlife habitat, deforestation, soil erosion, depletion of underground water resources… But the small family farm model is on the whole less detrimental to the environment than the industrial plantation model because they’re exposed to the consequences of their actions one acre at a time, making them more aware of their environmental responsibilities."

Whatever the fertilizer, potassium, nitrogen fixer, or organic compost the good growers in Vietnam sprinkle on their crops, this bar of theirs has some serious chocolate-nitro in it.
Appearance   4.7 / 5

A couple years ago, well before Viet cacáo splashed on the scene, sisters Wendy & Susan Lieu, whose heritage inspired them to name their company Sôcôla after the Vietnamese term for 'chocolate', predicted that the Central Highlands there -- which introduced cacáo later than the rest of the country in 2006-07 & encompasses Gia Lai; Phú Yên; Đắk Lắk; Đắk Nông; Lâm Đồng -- “will be better” than cacáo from the Mekong Delta in the south.

This one differs in a cross between the Naked FlavProfile of Dông Nai & the Fruits 'n Flowers of Ben Tre.

While the ancillaries (especially Texture & less so Aroma) hold the overall rating back some, this shows incredibly sweet for 74%; the extra butter pad the amplifier to the sugar quartile.

Even when bad, Viet cacáo rarely disappoints. And this, the most balanced bar from Vietnam by anyone to date.

Those Sôcôla sisters, a Harvard grad among them, are some prescient women.