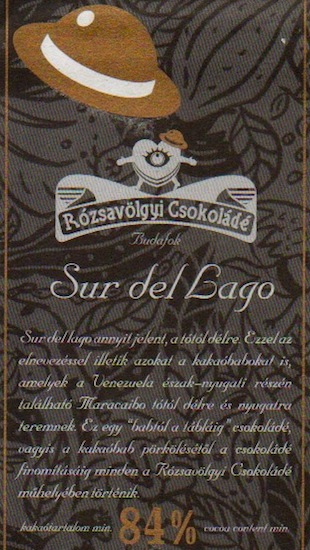 Impact
Choctopussy... wraps its tentacles around every orifice & floods them with deep cocoa.
Appearance   4.8 / 5

Strange considering the finery behind this varietal from the surrounds of Lake Maracaibo (technically a lagoon). Whatever the body of water status, it might as well contain octopus which somehow swam in this chocolate & left a watermark trace in its wake.

Usually starting around this percentage & up, a bar plows into the dirt around a mushroom patch. Very little of that here... the genes & the terra too benign. Instead this performs a back-flip into the sea (probably due to some issue[s] related to post-harvest / storage). Hardly surprising from a Venzy, for Mantuano hints as much.

84% pitched just about right... at the edge of a fruit burst on one side & a bitter beatdown on the other -- too little sugar to catalyze the former, while added cocoa butter & a deep conche prevent the latter (+ its aforementioned delicate nature).

Thus precariously equipoised & an instant party fav at a recent Brooklyn bar-b-q hosted by an esteemed figure in the field. (Perhaps because this individual stays offline without any annoying web presence -- my, how enviable; fear not, C-spotters®, annoyance being in the very DNA of this site, to check the cocoa-gurus if nothing else.) It convened a broad cross-spectrum of choc types -- from novices to experienced. Basically the same for what passes, in the words of one such self-described "chocolate expert & judge", at chocolate award shows these days, the beauty of which serves less as an educational tool & more as an empowerment device. All valid. So let's just call this the 1st Bklyn Choc Award winner.

Several here form a fan club for a local barsmith (who shall remain anonymous in the spirit of kindness & deference to these abused residents denuded of their hard-earned income at the rate of $8 to $12 a bar after grinding away in front of monitors for tumblr & 4 Sq.) & sat spent, beside themselves, as this embarrassed their hero. Oh, well, so much for Zsolt Szabad of Rózsavölgyi being a respectful visitor.

Intelligently / deftly formulated. As such, he really threads the needle in skillfully poising this bar on a fragile tip.