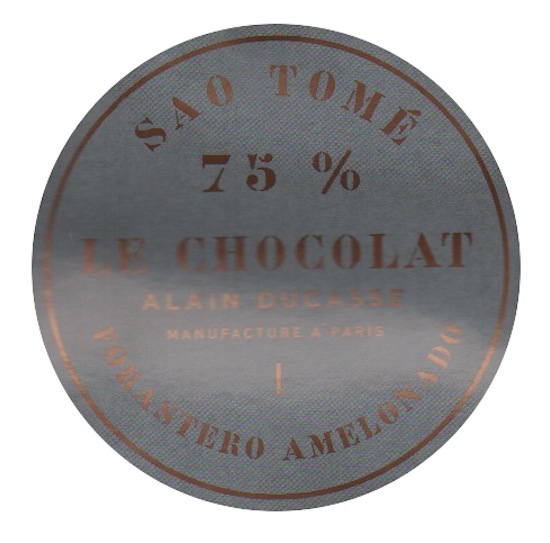 Impact
São Tomé & Trinidad share a common fate. Both provided historically-important refuge for transplants of cacáos from its South American homeland (click the links that underscore the countries to explore these islands & their cacáo provenances). Each enjoyed considerable renown for centuries that extended into the modern artisanal era of chocolate. Then, inexplicably, they fell out of favor when in the last 4 or 5 years barsmiths discovered supposedly more glamorous destinations, or the allure of the new from untried origins.

What a shame, for São Tomé remains a good source. With some fine tree stock in pockets, it has yet to be severely polluted by the modern hybrid clones that erode the once potent cacáo of its mainland neighbors across the Gulf of Guinea on the African mainland.

Just as Ritual's Gran Couva recently put Trinidad back on the map, Ducasse attempts the same with São Tomé.

For proof of this island's mettle, that a maker who just about mangles every origin with equal opportunity (including the vaunted Chuao) can produce a halfway decent chocolate in this bar speaks volumes about the tried 'n true, however tired, that constitutes Såo Tomé's cacáo groves.
Appearance   3.9 / 5

Ducasse goes all in with the full make-up kit. In addition to the essentials (cocoa mass) it incorporates sugar, cocoa butter, vanilla, salt & sunflower lecithin. The latter now rather notorious for discoloring chocolate flavor profiles as a vandal an original. In a testament to Såo Tomé cacáo, it handily cuts thru the sunflower screen.

Could stand a bit more sugar however (ala Cluizel's 67% Vila Gracinda) to tone down the bark, plus greater oxidation to curb the stringency, & lose the salt which magnifies rather than softens the tannins.

The bones & compounds are there... they just need sculpting. For example, the notable spices & fruit that this orgin usually conveys never really materialize.


With this bar the C-spot® puts the wrap on its coverage of Alain Ducasse, at least for this cycle of his startup catalog. What has been learned? Well, for starters, it re-confirms the C-spot's® 2 kewl 4 skool policy that advises against rushing to judgment about fledgling barsmiths, even very resourceful ones like Ducasse. Best to avoid them altogether for a couple years until they work out the kinks of their craft... which really shouldn't take that long.

Recently, some aspiring barsmiths have consulted the C-spot® about chocolate manufacture & business. Excepting some notable caveats, that experience dispels the myth, indeed explodes it, about the difficulty of making chocolate.

With but the crudest cottage set-up -- a Behmor 1600 (essentially a toaster oven); the Crankenstein cracker + a portable hair blow dryer; a universal grinder / refiner / conche (some small stonemill from India used by villagers for lentils) & a spatula for hand-tempering -- some more-than-acceptable to very good & even the occasional near-excellent chocolate can be produced. Results invariably hinge on 2 critical aspects: a) fool-proof cocoa nut quality (genetic pedigree; sound fermentation / drying; proper storage to inhibit mildew, molds, moths, etc) so even novices can package winsome flavor; & b) meticulous attention to details in the processing. In a word, it boils down to that unsexy thing called "logistics".

Under current market conditions that value any chocolate as fodder for candy, it hardly pays to adhere to these controls. So instead the entire industry, including (though to a lesser degree) the premium segment, gears up for volume & scale, for mass production (even micro-processors pump out thousands of bars a week).

Hence the paid consultants who roll out floor plans & ergonomic flow charts to maximize the punch-clock time & square footage space, turning what many originally conceived of as a dream into a daily grind. Efficiency thus robs the pleasure that the whole venture, from "tree-to-bar" as they clumsily say, supposedly stands for. Forget the notion that the planter who grows the stuff may never have tasted chocolate in their lives. Apparently neither have several barsmiths, for if they did they'd pause to release some of the abysmal product that passes for "fine chocolate" under their wrappers. And who can blame them? They probably don't have the luxury -- RE: time -- to taste the fruit of their own labor.

Meanwhile, let's fly to the tropics & exacerbate the situation evermore by encouraging co-ops in the "20/20 Zone" to plant more cacáo, thereby increasing productivity, & glut the commodity market to reduce marginal costs in completing the vicious (though said 'tree-to-bar' mouthpieces spout 'virtuous') cycle. But, hey, more cocoa means more money for the grower who only now needs to work harder / longer to afford the rice & other subsistence crops s/he used to pick themselves before the largely monoculture architecture of their field plots was built. This shall theoretically enable them to send their children to schools, often subsidized by govts & NGOs. When the kids grow up they'll leave the farmstead for the nearest urban center & swear off the family business while mom & pops age into their 50s & 60s (the actual average age of many farmers today). A dying breed... until the next crop of suckers can be harvested.

Oh Lord, must it be so complicated? 'It's just chocolate!'.

Little wonder then that a few burning with the passion to make chocolate do the math, the cold hard analytical calculus that with the hours required, the sweat equity, the frequent equipment breakdowns, the seasonality, the poor supply lines, the underpriced retail, the constant marketing, the stinking trade shows, award fiascos & so on.... it just ain't worth it. Some drop out before they ever truly begin.

Nonetheless, an overarching upward tilt creeps in a slow albeit undeniable direction. Benchmark pricing for premium varieties strengthens with each quadrennial. $10 bars were unheard of 10 years ago. Today they're becoming commonplace which should, again at least theoretically, contribute to infrastructure improvements &, better yet, livelihoods.