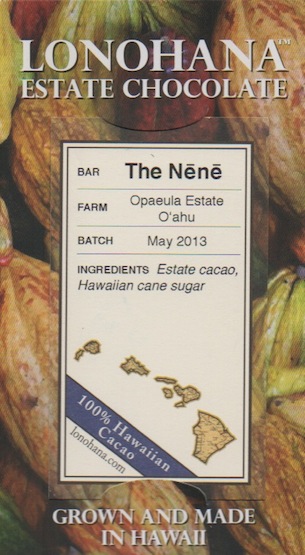 Impact
Nēnē is a species of goose endemic to Hawai'i; the state bird, in fact. Its name comes from its mewling call.

Padded toes & reduced webbing are their adaptation that allow them to swiftly traverse Hawai'i's rough terrain of lava plains. As herbivores, Nēnēs graze on seeds, fruits & flowers, so cacáo could be on their menu.

Consequently, this bar doesn't lay any goose eggs on behalf of The Chocolate Garage in Palo Alto, CA that co-created it & holds an exclusive on it, but a gooseberry instead (aka poha in Hawaiian). Check Flavor section below for details. 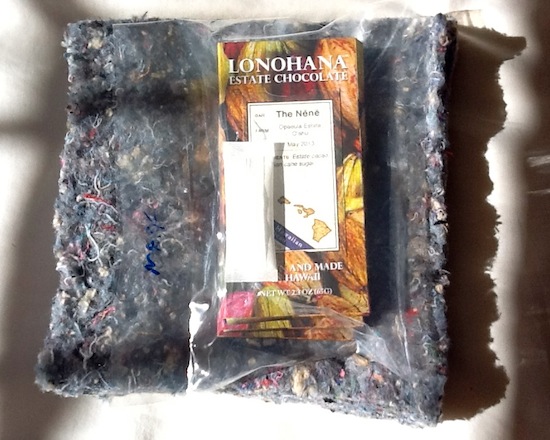 Aroma   7.8 / 10
many in choc talk about "forest floor" or the "the whiff of the farmyard", this encapsulates the great outdoors -- Hawaiian style -- dominated by stone, rocks, & sedimentary layers seemingly fertilized, if possible, by lava; very geologic / highly mineralized
add ethanol in the tank... fermentation tank, that is... another Oceania beer bar in league with Adi's cocoa pub that sours up a gooseberry
Mouthfeel   13.1 / 15
Flavor   45.4 / 50
gooseberry / starfruit on chocolate rolling into a brownie patch -> goes lightly white (breadfruit & atemoya) -> cinnamon / kola nut + sandalwood which becomes the mainstay, long & subtle over that abiding now-lava chocolate... til bituminous dust / charcoal heralds black cherry -> bluestone (stone-ground chocolate) -> recedes into starch (poi better known as taro)
Quality   18 / 20
A couple years ago, Seneca Klassen of Lonohana slipped a prototype of this bar into a few hands along the chocolate underground. That one showed even more volcanic chocolate / cocoa dust & blacker fruit (black berry / black currant / black cherry) with licorice twists. Only a wash of bagasse (pulp from the sugar cane) spared it from a complete black-out.

The update here really licks the flames without burning the tongue. Combination soil & roast creates those black FXs -- the volcano & the fire that is Hawai'i terra & Lonohana barsmithing -- in a chocolate cauldron. And yet brighter than its past.

A prototype now archetype... very grounded / close to the source: extremely Hawaiian... fruit juice, packed with anthocyanins, made from concentrate with smooches of black-lava chocolate. All sweetly stratified / layered atop one another.

After a spate of very trying bars by other barsmiths on these islands, Lonohana revives the earlier promise of Hawaiian cacáo that attended the Dole-Guittard release called Waialua.

Still some kinks to work out. Klassen readily acknowledges that he often improvises, currently following no set regime in his post-harvest practices, which have included experiments of inocula (yeasts / bacteria) to accelerate microbiota activity in the fermentation. He generally abandoned those, settling on a straight up natural ferment. Ditto the processing back inside the workshop where a standard oven, the ubiquitous Cocoatown 65L all-purpose unit, & a Selmi temperer handle the finishing touches.

Improvements continue apace. The formerly unsettling Texture (which required additional kneading in the conche) as well as the rugged flavor tail (that lent a rough-hewn American feel) have given way to refinements.

Coupled with his extensive agronomic field work (to be explored further in tomorrow's Daily Review), it all announces in no uncertain terms that Seneca's venture is driving its stakes deep in the ground for the long haul.