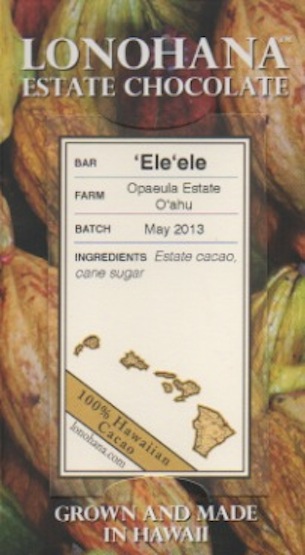 At the risk of sounding nationalistic (guilty), there’s nothing like an American original.

Aroma   7.6 / 10
2013
huh? volcanic Hawai'i?
flat as the Great Plains of the Midwest laid out with corn stalks & soy beans
almost deadening
gradually steams off black tea & a shallow acid stream, as if venting over from Madagascar, before forming a lightly stone-ground cocoa

2015
a substrate of volcanic caramel with hi-fruit overlay
Mouthfeel   13 / 15
Flavor   46.2 / 50
2013
erupts straight out of the Aromatics... corn... & not some corn-on-the-cob but candy corn backed in dragonfruit + rambutan -> blond caramel twisting thru a Milk Choc cast (spooky good) -> sticking to the theme: white sandalwood -> slow steady-state dissipation to a slightly bitter black tea simmering over lava cocoa -> flirtatious macadamia completes the excursion -> plunges away on nut toffee

Very much a pioneer with that resourceful 'can-do' spirit, he has been researching & reading deep material on cacáo (some of it fairly arcane & archived) while weeding his property in Oahu, HI. The growing level of know-how Senaca brings to this venture reflects the commitment & comprehensive nature with which he goes about the quest. It augurs well for boutique chocolate generally as this niche continues to differentiate from the bulk trade.

Klassen's less interested in NGOs, non-profits, private group & governmental agencies promising to transform the chocolate value chain (think Fair-Trade, Rainforest Alliance, USDA organic certification schemes, heirlooms, award shows, ad nauseam) & more moved by the aspirational likes of Nike -- just do it -- even if that means it'll take an army of one -- by himself. Which in his case includes his family + that of a friend's (the Boones) who partner together. For no man is an island, right?

They have that rare perspective in the mad rush of 21st century branding to ignore growth models &, in Voltaire credence, tend to their own garden (in this case their joint 14 acre plot cultivating an admixture of cacáo genotypes) & optimize quality rather than maximize quantity.

To make it all pay, Lonohana initiated a CSA campaign (Community Supported Agriculture) in which buyers purchase an annual membership ($425 & up) for a year’s share of chocolate.

The results speak for themselves. LOUDLY.

A uniquity in the annals of chocolate. Brutally delicate; a gale-force gauze.

'Ele'ele means 'black water' in local Hawaiian dialect, another sign of just how apt if beguiling Lonohana names its bars. Black for sure, in concert with its Nēnē bar, & then some. Call it Black+.

In character this marries the bright lightness of a Madagascar Dark-Milk (yep, that's right, minus the dairy) to the rugged terrain of a pyroclastic Caribbean island cacáo (pick 'em... Grenada or St. Lucia) for an all-in-one transglobal hook-up, syzygy so to speak from Hawai'i.

Though it shares a similar seed lot with Nēnē, the bonus caramelization here owes, probably, to a roasted arc starting around 270ºF & topping out at 315ºF, whereas Nēnē undergoes a consistent 265ºF throughout.

Absolute zero astringency; those volatiles get subsumed in defining Flavor & smooth Texture. Some welcome bitterness though, but only to remind that this cacáo sits atop a thin crown rising out from the submarine depths in the middle of the largest ocean on Earth.

Lonohana keeps this up & pretty soon Seneca & crew will have only themselves to top.

2015
Quite similar to earlier vintages with enough distinction to merit another round(s). Above all it confirms the original impression of 'Ele'ele's global stature. World-class chocolate.