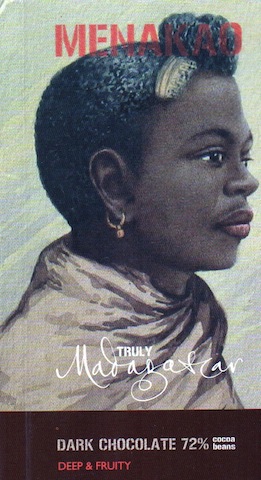 Impact
Years ago, the C-spot® hosted Weekly Roundtables featuring its patented 'Diagonal Chocolate Tasting Flights' at The Brandy Library (Tribeca district of lower Manhattan) for top area chefs, baristas, bartenders, sommeliers, & world-class chocolatiers. Typically the evening started off on the lower end of the cacáo-content scale. At that level it's primarily a female event, with guys hooing the very thought of sweetly innocent chocolate, while rocking their hard liquor. Later on, the night grew to the darkest bars when, interestingly, women would gradually peel off & the machismo factor took over as men yelled ‘hit me’ to test their resolve at the more punishing percentages.

(K, ok, a bit of a generalization as more women today than ever before sport triple-6 daredevil attitudes & tattoos on their foreheads, emboldened by Title IX programs to be game for anything. And greater numbers of men, coddled thru sensitivity training, hanker for their milk nowadays in the form of White Chocolate. But enough gender distinctions still exist that such preferences -- observed in focus-group marketing -- hold true if somewhat eroding.)

The switch point for this changeover usually occurred around 70%, give or take a couple percentage points (maybe this is the true significance behind "70%" rather than some mythical notion of an ideal-flavor ratio).

Menakao subliminally illustrates this phenomena with its packaging. On their Dark 100% & the Dark 80%, mugs of men signal the brut & bitter character of the chocolate within. On this 72% the visage of a woman graces the cover. And where those other 2 bars bore claims of ‘bold’, ‘robust’ & ‘punchy’ (the latter a possible reference to fat slow pokes reflected in the bar’s Texture / Melt), this boasts the explicit (borderline sexual) message beneath: Deep & Fruity (click image upper right to enlarge).

Just what can 28% sugar do for Menakao's unsweetened & coarse Dark 100? Apparently enough to believe that it's not the cacáo in the bar that makes the chocolate but the sugar. Aha, such heresy that hardcore zealots will probably throw around accusations of blasphemy. Go on; bring it & be prepared for the response.

What else however explains the difference? The conch works feel the same. The roasts maintain hi-heat. Such is life: seldom is it about one thing or another in & of itself but the interaction between them.

Neither charming nor all that charismatic, just poised & patient... this Menakao Dark 72 a chocolate study in grace exerting soft power.

Perhaps lacking the highly stylized refinements of Amedie's early Mads, the exuberance of Patric's juicy models or the hedonism of even the Guittard Ambanja, its more rustic demeanor nonetheless captivates the senses by encapsulating a full-spectrum flavor rarely found in Madagascan chocolate with outstanding reach around & length that keeps giving well beyond the end. And all of it harmonized / balanced at such a natural pitch.

After so many years of harvests & bars from this origin (the C-spot®Census houses over 70), many quite mediocre, Menakao re-inspires the urge for having yet more of them, despite the great ones being few & far between. The reason? For sensuous moments just like this Dark 72.