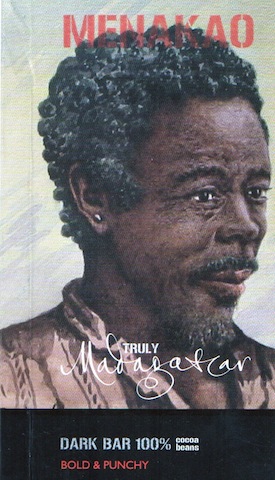 Impact
Introducing Menakao -- a portmanteau of 'men', meaning 'red' in the local Malagasy dialect, and cacáo, after the tree from which chocolate derives. In short, 'red cacáo' which if all true would also refer to the ruby-colored pods of noble Criollo, some of which found sanctuary on Madagascar (suitably nicknamed the 'Red Island due to its oxide deposits). Madagascar still harbors relics though by no means does Criollo constitute a majority of the crop from this isle.

While logos on packaging can be so much wallpaper nowadays that consumer eyeballs glaze over, many bloggers still gush excitement over every Fair-Trade, organic, UTZ, Biodynamic, this 'n that co-op & the raft of other seals / certificates that litter product packages filling the aisles in stores today. More are coming.

Menakao's business model should double their pleasure & make them downright giddy with ecstacy to learn that... show more »show less «

... Madagascar now boasts 2 such organizations: Madécasse & this (it had a 3rd -- the defunct Malagasy -- which went belly up). These companies represent a more vertically-integrated ethical chocolate play. Everything in this bar for instance is 4-P (planted, produced, processed & packaged locally); Bud-to-Bud™ in the spirit of farm-to-fork well beyond bean-to-bar. It also professes ecological sustainability & economic fairness.

Menakao should be viewed more as a brand than an actual chocolate maker, which puts it in the same league as Madécasse, Orecao, Chchukululu & others flooding the marketplace. It coordinates the show, connecting growers in the field with the CINAGRA manufactory located on the outskirts of Antananarivo, Madagascar. Consider it a truer authentic version of the faker Trader Joe's® which private-labels the goods of others under its own name (more on this with another bar, at a later date).

Expect these to proliferate because with Photoshop & a catchy URL, just about anyone can slap together a website to convince unsuspecting consumers that they're altruistic global citizens out to save cacáo farmers from the candy giants (Nestlé's, Callebaut, et.al.).

Sadly, what should be the norm (ethics as standard business practice) has become the exception, a niche inviting opportunistic & often cynical marketeers (re: sharks) to prey on humanity's better instincts. Their "feel good" appeals largely target consumers in the developed world.

Of course the irony is that people in the so-called "1st World" -- well-practiced at environmental degradation & unscrupulous business paying generally low wages -- freely accept the privilege to pass judgment on the "3rd World". The dynamic at work smacks of old-paternalism in a different suit. Given the rise of the Madonna-Oprah Complex call it the 'new maternalism'. Perverse however countenanced.

Please excuse if the C-spot® tends not so much to ignore these trends & approaches but to look beyond the gloss... such as the romanticized pastels on the package (click image at upper right to enlarge)... toward quality which, in the main, subsumes these ancillary attributes.

And one additional caveat: Is there large enough consumer demand to sustain these brands? Maybe if China & Asia as a whole go all-in for chocolate because the traditional markets (Europe & North America) nurse a paltry, albeit growing, tribe of premium chocolate consumers who demand principled quality. The other 99% (ok, perhaps 96%) could care jack about it other than to have some cheap fodder for their cookies & smoothies seeing how, again, they too are used to getting jerked by The Man (or keeping with gender neutrality in the new order of the system, The WoMan, pronounced woe' man).

For the longevity of brands like Menakao to uphold genuine self-sustainability supported by consumer buy-in -- rather than relying on the largesse of some handout which characterizes so many NGO, gov, & philanthropic projects in the generalized "Fair-Trade" space -- will spell the difference between 'feel good' and 'real good'.
Appearance   2.9 / 5 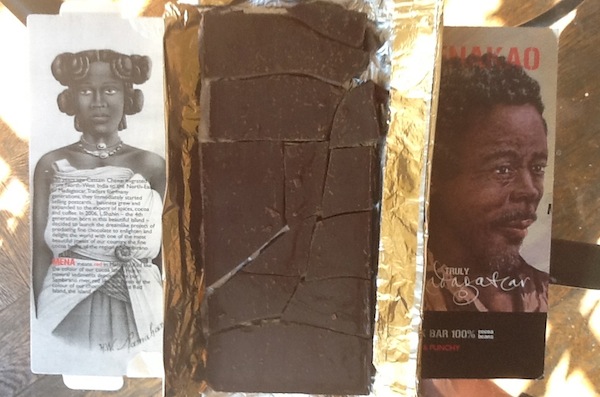 Damaged in Transit: a chocolate-puzzle pieced back together for this forensic photo shoot in order to file an insurance claim for a refund (Note to Menakao: upgrade the folds on the box, the glues used for adhering it & the coffin-tight foil which SNUF [Serves No Useful Function] once open)

Though it sits precariously on the verge of one, no violent outbreak or insurrection occurs. This remains fairly well centered & composed within itself thanks to a sufficient butter pad in excess of the nutritional panel which reads way off: a CBS (Cocoa mass / Butter / Sugar ratio) of ~7:5:0 appears highly dubious given the added cocoa butter (plus it lists a ridiculous 25% protein content... please). Wrong in one area, of course, raises suspicions in others as to the veracity of numerous claims put forward by the label. Chalk it up as part of the growing pains of a start-up except Menakao has operated domestically in Madagascar for years under the label Tsar so there are no excuses.

Inevitable comparisons to that other unsweetened Madagascar -- Pralus' Le 100% -- stretch beyond the percentage, the origin, the similarly stern roasting, the FlavProfile. Indeed, they embody former personnel from Pralus now working with Menakao.

This lacks the brilliance & sparkling jewels of Pralus, his endowed with more mineral brightness; the difference between, say, quartz & salt.

Still, it lives up to the wrapper's declaration: "BOLD & PUNCHY". Punchy both in the sense of a little alcoholic thanks to the gin note (a classic punch bowl contains arrack from coconut sap, water, lemon, sugar & spices; this bar has no sugar but the lemon-liekness & that gin validates it) & the Texture definitely shows rather short, thick & fat to fit the definition.

As for the boldness... yes, a very bold first step for a fledgling label into the unsweetened territory where even most vets are afraid to tread.

All in all, quite precocious, even respectable.