Impact
Oh, Jesus, another friggin' bar from Ecuador. Frigg, of course, the goddesses of Norse mythology (the ancient belief system of Germanic & Scandinavian peoples, some of whose descendants crafted this chocolate in Sweden). She the patron of marriage, fertility, & the household. Due to her resemblance to a certain Roman deity, the Latin day of Venus came to be known as Frigg's day or Friday.

Staying with the Nordic theme, the valkyries, as any Wagner listener has heard, are maidens sent by Frigg’s husband -- Odin -- to select worthy warriors slain in battle & escort them to Valhalla – that great hall within the home of the gods. Valkyries possess the power to cause the death of warriors they dislike or guard the lives of those they favor.

Similarly, CCN-51 virtually killed off Ecuador's fabled Nacional cacáo in the 20th century. Since then the country has languished episodically in cocoa limbo if not hell. Rumors circulate about of a revival.

This bar endows with all the hallmarks of such rumors, perhaps making good on the original promise of CCN-51 (see Quality section below for possible details). 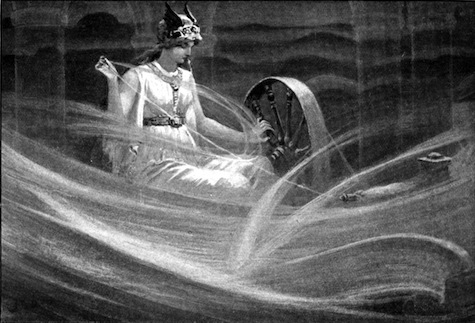 Aroma   9.3 / 10
shoots out the mylar wrapping faster than a missile launched from a grain silo transmogrified into a pastry shoppe: wheat berries, cake flour, biscuits, & bread crumbs... with a little dab of (cocoa) butter

delighting if quite out of place for the origin
Mouthfeel   13.6 / 15
Flavor   45.1 / 50
that kind Aroma continues on into the Flavor
candy corn (glucose / honey + li'l egg white) -> Nips® butter-rum but with real rather than artificial flavoring -> soft spice (cinnamon / sugar), then tobacco-lite piped with vanilla -> round kid-cocoa, sweet cream & biscuits on the side -> goes down plain chocolate cake
Quality   16.3 / 20
Where the hell did this come from?

Wait... Siela Maximova, cacáo geneticist at Penn State University, keeps talking about a "new & improved" CCN she has had a hand in. For years nothing really came of it. But if this be it, let's have some more.

Apparently out of Ecuador's left-field bullpen (wherever that's located), here's something atypical from there -- CCN-51 or not. Maybe CCN-151 after Bacardi sweet-rum fame, without the alcohol.

Either that or Malmö partially alkalizes its cocoa for a tremendous makeover &/or spins in some unlisted additives, all moussed in cocoa butter.

Hardly the most expansive chocolate. In truth, rather narrow. But a new taste from an old place. Sure the cinnamon-vanlla strike as commonplace "Arriba" but with moist succulence of Betty Crocker at her best. Light & airy & full of surprise.

Just put it on the dessert menu & skip the pie.