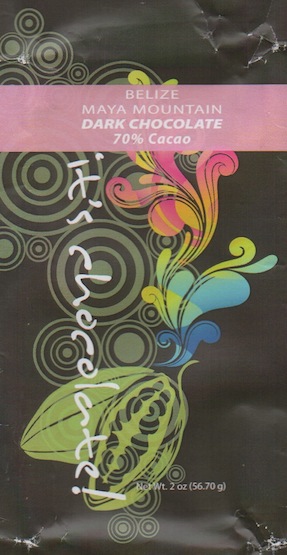 The prototype comes up a slow starter & leaves a slightly caustic finish (that chalk). In between, however, a damn good chocolate hard on the heels of greatness… which the aged bar has mellowed into just that. Great.

The closest any barsmith has come to Maya Mountain Cacao's (MMC -- the collectors / post-harvest handlers of this cacáo in Belize) own conception of their cacáo's flavor profile. Indeed, this exceeds it. Essentially its reference standard now.

Some real soul-sauce that just keeps on giving. That tobacco-chocolate undercurrent carries the progression, including a plump raisin that never quits. Credit an almost patentable roasting curve by Rom, coupled with an adjustable refining phase. And pitched at just about the right formulation.

The lone area for improvement was strictly cosmetic -- Appearance, particularly relating to the prior tempering. it's chocolate eventually took care of that alright, which should've simultaneously solved the Textural hiccups which sacrifice the length some. And yet the melt courses even quicker the second time around (hmmm) & tempers a bit of the range too. Other than that this bar constitutes flavor without flaws.

It shows that both fledgling concerns -- MMC & it's chocolate -- are just getting ready to rip it.