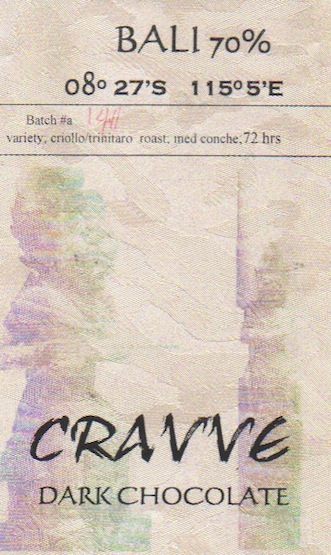 Impact
Birgitte Rasine writes about places the way the C-spot® does chocolate, including one “so old it was ancient before its time”.

Cacáo & Bali have spent well over 100,000 nights together now. Too young for antiquity; too aged to still be in their infancy -- unless measured geologically.

This bar serves as a momentary snapshot of their current relationship.
Appearance   3.5 / 5

Aroma   7.7 / 10
smoked gouda with star anise
more spices join in, including tar 'n nicotine (from tobacco leaves) & just plain old asphalt tar
shafts of rambutan & grape
rather paan-like
Mouthfeel   11.4 / 15
Flavor   42.8 / 50
fruits away on chocolate-covered raisin -> malted molasses -> yam -> anise-flavored gum -> licorice-caramel pudding -> toasted butterscotch -> lines out on cotton fabric
Quality   14.6 / 20
From an underserved origin, Peter Mengler of Cravve reports that his partner on the ground in Bali goes around to the old orchards, ala the late J. Sandy Hepler, on the lookout for Criollo collections. The 5 day ferment they put the cacáo thru suggests other genotypes in the mix as well since shorter fermentation typifies Criollo (climate dependent, of course, & local conditions vary). In an emerging trend, Cravve subjects the pile to designer cultures such as champagne yeasts.

Grape very much in evidence in this bar, despite 72 hours in the conch (then again, conches vary too), largely preserved on account of a moderate roast.

The FlavPro follows the contour of Åkesson's Sukrama up to a point... for this by comparison shows rather 2-dimensional -- raisin & licorice -- almost constant & consistent from start to finish. Decent chocolate principles; core basal cocoa aplenty, generally under-riding the top-notes above (again, fruit 'n spice).

No head-banger. Easy to consume while going about the tasks of the daily grind without having the need to stop & ponder.