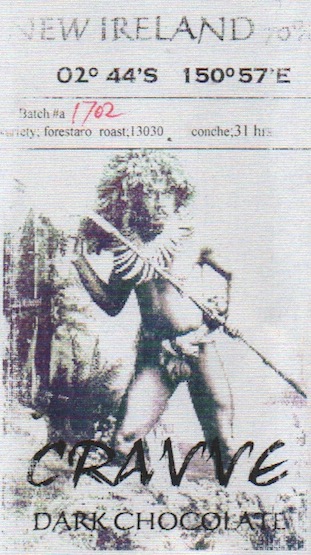 Impact
Cravve ventures solo & offshore from the mainland of PNG where most Eur-Am barsmiths reap their cacáo. Instead of following fellow Aussies Daintree & Zokoko to New Britain (another island next to the big island), it heads for New Ireland (sounds as if the UK has relocated to the South Pacific).

Its outline likened to the shape of a musket, New Ireland's chocolate tastes of coming right out of the barrel of one.

Aroma   6.8 / 10
chlorine & wintergreen (what a combo)
teak where the tree trunk meets the dirt
smoked sweet resin
Mouthfeel   10.6 / 15
Flavor   38.9 / 50
sweet champedak pulp on moderate cocoa -> lighter fluid -> breadfruit -> tingling sensation leads into gingerbread -> gets wormy & yeasty in keeping with the Texture -> chicory & copra
Quality   14.5 / 20
Quite distinct from the mainland in some respects. For instance, the well articulated gingerbread passage & the opening champedak. They compensate, though by no means neutralize, the unforgiving stretches… the redeeming values in a mini cauldron of sorts. In the flammable Papua tradition, New Ireland mechanically gases, errrr, dries its cocoa.

Depending on the curve, the 130ºC / 265ºF roast for 30 minutes probably compounds the effect, further exacerbated by a relatively curtailed 31 hours in the conche. No matter how Cravve treats these nuts, the vapor taint ingrains a permanent defect rather than a mere deficiency -- gaseous as opposed to smoked. The trade-off struck accepts that fact in the interest of preserving some of those aforementioned unique traits.

Promising enough though to warrant a second sample if / when the islanders ever finish cleaning up their post-harvest bonfire.