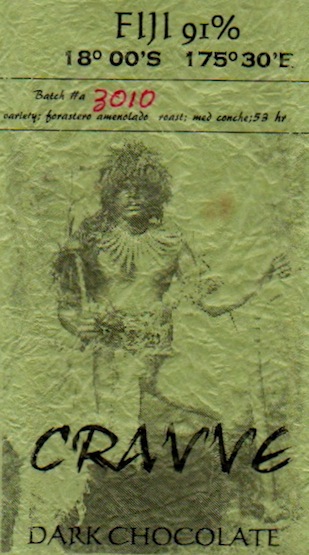 Following the pattern set with its Vanuatu releases -- first at 64%, then re-upped to 83% -- Cravve casts caution to the wind with ever more abandon in reconfiguring Fiji from a meager 55% weakling to this muscular 91%.

Kids, that's tantamount to flying immediately after crawling without any baby steps, let alone walking & running, in between because it intuitively understands that forging ahead creates more stability than either sitting or just standing there.

Aroma   7.9 / 10
initially a blank slate
wait…
balsamic bar-b-q-sauce turns to ale (the latter a tell-tale Fijian tag)
lite-root beer
wha' w'all got here?
Mouthfeel   11.4 / 15
Flavor   43.1 / 50
nice overlap with the Aromatics, especially overhanging root beer which soaks this island's soil now found potted into this bar -> breadfruit 'n butter erode the ground bitterness (incompletely) so reminiscent of the so-called "cannibals tomato", leaving behind some root tubers -> ginger -> caustic finish to galvanize a dry eucalyptus
Quality   15.3 / 20
Cravve backs off some -- medium roast / 2-day conche when this seed type could use just a little more of each. Given the rather simple nature of this cocoa -- doubly so since the seeds were washed, robbing the profile of many flavor precursors settling in the Nib -- it probably feared that any more treatment would rub out what little flavor offsets remain. The inordinate percentage, however, offers some extra headroom / leeway for just that.

Nonetheless, quite respectable for the 90% Class & another demo that Cravve continues to gradually up its game… substantially.