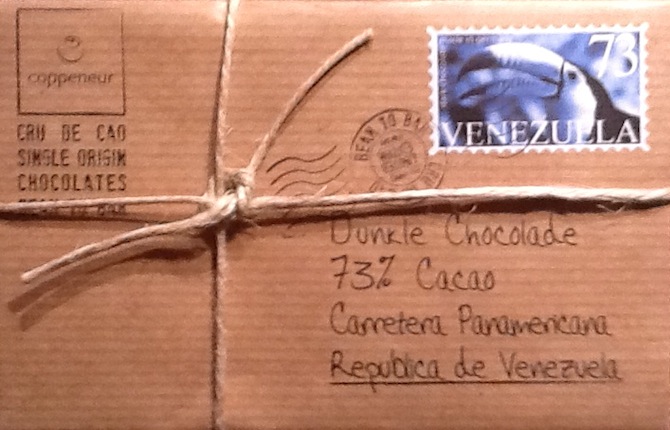 Impact
When asked for some particulars on Carretera Panamericana (or The Pan-American Highway), an honorary C-spotter, born & raised in Venezuela who has lived there all her life & is deeply enmeshed in its chocolate culture, replied: The Carretera Panamericana is a road way that crosses different countries of Latinoamérica. In Venezuela it goes thru many zones with cacao groves. The government launched a project called like "La ruta del cacao" to incentivize the growth of the cacao industry. (Editors Note: practically every Latin America country now has such a route.)

The locale named Carretera Panamericana lies about 20 miles due east of Lake Maracaibo.

This bar tastes of unripe pods, hanging off cacáo trees on the side of the road, picked by a passing truck in the middle of the night.

Other than seed selection, this bar suffers under Coppeneur's light-handed treatment. Part of the German label's "purist collection", similar to Sharffen Berger's Maker Series (as opposed to the rest of its impure line which, together, gravitates toward general decline). The progression in this chocolate questions whether it's roasted at all. Info on the wrapper lists 40 minutes in the oven but, curiously, no temperature reading. Perhaps 40 minutes on the retained heat of the pilot light.

The result: Venezuelan cacáo, which traditionally glows with warm golden nut inflections, instead delivers a stringent green legume, if one buys into the notion that cacáo, once fermented, yields a cocoa bean. Those nut tags exist… lying dormant in the undeveloped subterranean folds.

The kind of material that those who prize "raw chocolate" will acclaim 'authentically close to the bean'. In which case, spare Coppeneur -- which in its heyday routinely scored genuine high marks with every Venezuelan release -- & just eat the beans.