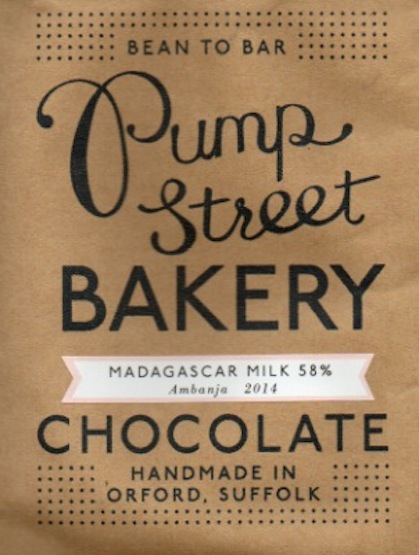 Impact
A White-on-White-on-White-on-White phenom (quad-White for short -- milk, sugar, cocoa butter, & whitish cacáo seeds). Nonetheless lays down some dark impressions... as mysterious as the footprints which appeared around Devon, England, 1855.

In February of that year, the Devil, perhaps consumed with wanderlust, apparently took a long stroll across the countryside there, somewhat in the direction of Suffolk from where Pump St. operates. His outing might have passed unnoticed, except it was snowing heavily at the time.

When residents awoke, they found unusual cloven hoofprints all over the place — not just on the ground but also on obstacles like walls & even roofs.

Perchance the Prince of Darkness has returned & stepped on this bar. As chocoisseurs are wont to say, 'diabolically delicious'.
Appearance   4.8 / 5

At 58%, both the heaviest & the duskiest Madagascar Dark-Milk yet, although Coppeneur Menavava Vollmilch at 52% with Nibs might equal or eclipse it. Other than Texture, they share common characteristics.

A bit of a surprise that so few barsmiths venture up this high percentage given the island cocoa's generally piercing nature that easily cuts thru. 60% or even 65% should still be identifiable as a Milk Chocolate.

The higher than average cacáo-percentage influenced no doubt by the anomaly of these particular Madagascan cacáo nuts. Pump Street's dairy-free Madagascar 75% harbors cream tones so adding milk naturally suits. The seed-lot more Criollo in its orientation rather than the customary admixture from the island that usually produces bright berry tones. Here the flavor subsides into the lower but deep reaches.

And remarkably, no vanilla employed… that which emerges does so intrinsically. Or via the devil himself.