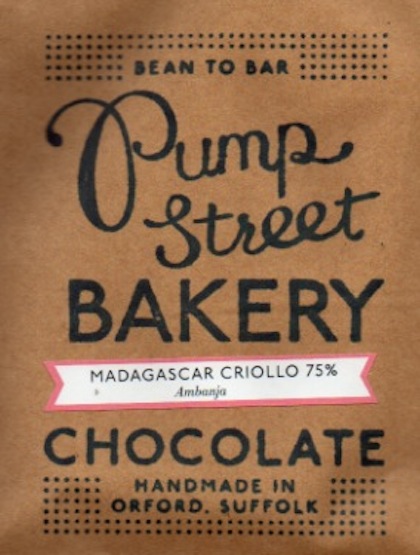 Impact
Madagascan cacáo, it is noted, makes for some of the most "feminine" chocolate. Svelte & succulent, juicy tarts; very berry-laden. So much so it can accentuate a self-identified woman trapped in a man's body to satisfy their autogynephila (a term coined by radfem Sheila Jeffrey... now that's an authentic transgender name… meaning sexual arousal at the thought of oneself as female) without having to undergo reassignement surgery for breasts & a vulva. (Perhaps macho chocophiles out there can hook-up with these autogynephiliacs over some dickmatized bar [or is this screed just going too damn far?].)

Enough digression, back to the matter at hand: This one from Britain's Pump St. strikes a bit foreign for the origin due to the select seed mix employed. Akin to Queen Elizabeth waking up In the early hours of July 9, 1982 to find a stranger in her bedroom. The then 32-year-old Michael Fagan broke into Buckingham Palace — for the 2nd time no less — & entered her majesty's very private quarters. She awoke when Fagan opened a curtain -- rise & shine, darlin' -- & proceeded to talk to her while awaiting the police's arrival. A gentlemen.

This tastes somewhat admixed however, even partially checkered.

This the Heir to Domori's Madagared and Rózsavölgyi's Cacao Criollo in pedigree -- both of those also labeled 'Criollo' & both stellar productions at the time in their prime. In terms of strict Flavor, however, this tracks Bonnat's 2010 Vintage: a generally lower realm proceeding, including unusual tags altogether, next to the customary bright acidity of most bars from the island.

Some prickly tones escort several sweet charmers, the latter threatening to break this bar asunder while the former maintain curiosity, even enthrall, to continue this longer. Yes, a pricker bush with berries. And it holds this tension practically throughout the 2nd & 3rd trimesters.

Sequentially similar to Pump St.'s Grenada… the longer / deeper this melts thru, the more it grows & grows after, frankly, a rather halting start.

'Hmmm, all so very interesting', as the chocoisseurs say.