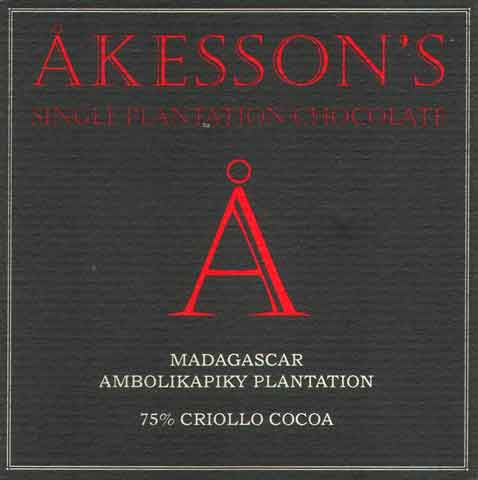 Impact
Symphony No. 6 (“The Pastoral”) in F Major (‘F’ in this particular case here for Furnace) may be the greatest Farmer’s Almanac ever. Beethoven was just listening to the weather; that’s how ingenious he is.

Judging by the Flavor here the Criollo may be the real deal that can trace their lineage to either the originals that crossed the Pacific circa 1670 or from a later introduction via Venezuela.

Though he outsources the final processing, thus negating any all in-country / pure-source designation, Åkesson maintains some input with the parameters of its handling during manufacture, making him virtually a ‘bud-to-bud’™ maker (tree bud to taste bud) in league with Claudio Corallo, Danielo Vestri, & Diego Badaró – an elite class.

True single-estate, seen (though unadvertised) before in many craft bars from Valrhona, Pralus, Coppeneur, Amano, Patric (they all hanker for Åkesson’s beans) &, most particularly with respect to this select Criollo crop, Domori’s Madagared.

Similar to that, this lights the torch up... ever more so. Among the darkest Madagascars (in league with Marcolini's, etc.) - the hallmarks of Francois Pralus who conducted the roasting & molding. Very little let up in the charred undershadow that produces a heavier-toned, almost overbearing bar & burns off some definition in the wake of that delirious beginning that raises expectations to super high levels.

Unlike Domori’s version, this misses the supple chocolate core to keep those anticipations up, & all those browned fruits (the 5% differential in sugar offers some explanation).

Still, Åkesson gets it with passion & respect for the nomenclature, horticulture, species, harvest, light-handed fermentation, skillful drying, & so on… no envelope pushing here, just good, steady work for a quality bar on its own or with dark rum. And don’t waste it on beginners….this is for Emma Peel & John Steede, not Barney Phife….give the kiddies the Chocolove & save this one for yourself with close intimates.