But wait… it's just starting to get confusing.

The Spanish, Germans, Brits, Australia, Dutch et.al. at one time or another have all taken turns colonizing & carving up the place.

In truth there's only one island geographically-speaking & really one nation but politics, even to this day, likes to complicate matters. Indonesia for instance currently pursues a deeper 'divide 'n conquer' strategy in partitioning their portion of New Guinea into smaller political units.

Cacáo, ever imperial, dismisses the vanity of artificial borders that hope to trump geography & botany.

Original Beans (OB), a Dutch label, revisits the territory -- home to equatorial glaciers that forge the highest peaks between the Himalayas & the Andes (some tall company) -- & puts a new spin on it for a chocolate from this island that customarily causes lots of choking due to smoke-filled bars.

Leave it up to OB to cut thru the haze that covers much of this cacáo wasteland (primarily from substandard local practices rather than any inbred genetics). Indeed OB pioneers & helps shape the new era chocolate movement. It travels among the vanguard; an advance team with a cause that ramifies The 3 Ps in a Pod: People, Prosperity & Planet. Over the course of their journey, the company paves the way for others in its wake of hacking thru the jungles from Piura that led (partially) to Valrhona’s Andoa, introduced Pacari to the Peruvian villagers responsible for Quemazon, & a Congo venture leveraged by Theo whose bar from there ended up in the hands of Ben Affleck's charity.

No doubt the cast of chocolate characters will be hard on OB’s heels to get in on this Papua Kerafat.

And, hey, beyond good taste, if nothing else Original Beans provides a geography lesson in a bar. 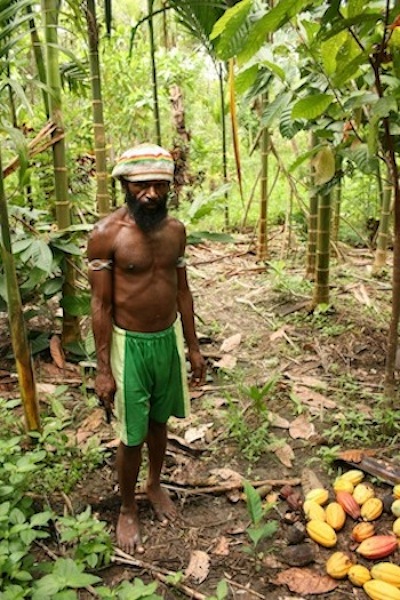 The origin of this chocolate currently involves 2 communities in Jayapura, Tanah Papua, Indonesia. Both situate adjacent to primary forest, with use & logging rights to more than 12,000 hectares.

The quid pro quo: communities refrain from any further logging & environmental degradation in exchange for cacáo investments & harvest purchases by OB. Seems like a good deal that strikes a grand bargain. 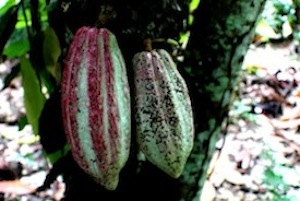 Together they’re reviving historic cacáo varieties brought to Papua during the Dutch colonial period, among them probable Criollo & Amazons (awaiting DNA analysis / confirmation). That the pods size up on the smallish (re: wilder) side, some with blushing color & a rather pointed apex -- all support some pedigree in their lineage.

Locals refer to them as ‘Cacao Belanda’ (Dutch for ‘Cacao Netherlands’ in deference to that aforementioned history). Rather than stir up past politics, however, OB chooses to name it Kerafat, citing original source documents. Happily, all stakeholders have agreed to it.

Despite a rather white-like Porcelana Criollo demeanor of Venezuelan undertones (subtle macadamia? from Papua? an origin more noted for its wild dirty ground nuts), this chocolate melts quite dark & terrainean for the percentage -- 68%, Felchlin's benchmark weight, including what feels like a 6 to 8% cocoa butter pad. Such a formulation usually spells a cloying & underpowered profile but here it aligns quite true & correct.

Well-rounded symmetry all the way thru… from the balance between acidity & bitterness (low in both categories) to the nuts (cocoa & otherwise) interplaying alongside caramel. And pitched against a wisp of wood-fired roast &/or controlled (partial) smoke in the drying process. Plus, a duration that outlasts its likely genotype / expectations thanks in part to, again, that generous butter cut & crystallization that's enduring.

With a spate, indeed a deluge, of boutique chocolate flooding the market, this represents the kind of bar worth wading thru the swamps in search of reaching those rare few-&-far-between inspiration points.

A trophy chocolate fit for the mantle, right up there with deer head antlers & ivory elephant tusks but, unlike those, this is better than politically correct, it's a grand environmental bargain. More than valuable: precious.