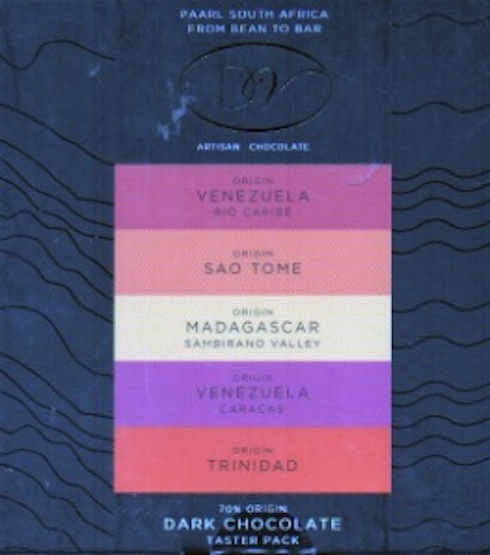 What will come as a Shaka Zulu to many in the North & West, this barsmith out of Paarl, South Africa (along the coast of Endless Summer waves) both unites & usurps the various cacáo origins for a single tasting collection in the hotly-debated tradition of that Bantu / Nguni warrior-king from this country.

The following details a Chocolate Bar Blitz – in this case six reviews in one. the C-spot®still maintains its actual sampling policy of only ‘1-a-Day’ in order to obtain an accurate & thorough gauge on a chocolate; as well as to avoid inevitable palate fatigue which occurs with multi-samples in a compressed time session (no matter what so-called miracle palate cleanser may be invoked). For the sake of publishing efficiency, they’re consolidated into this single review. The overall rating & metrics (upper right) reflect a composite average of each bar's individual measures.
Appearance   4.6 / 5

Caracas -- in the 19th Century Venezuela's capital city doubled as a trade-name for a cacáo variety (albeit loosely-defined -- basically the entire coastal-growing region in that country) of esteemed quality; this follows suit, though quite distinct from Bessone's Caracas… this warms with mead spices in another brownie but places more emphasis on its biscuit character -> rolls toward a gingerbread of significant sustain

São Tomé -- been a while since anyone re-visited this origin, a former darling of the artisan set; balloons up red in a classic tart cherry twist backed in wooded-cocoa & that identifiable island clove for a Sour Tomé… reverberates baobab pulp

Madagascar -- so ecumenical now as just about every barsmith in the artisanal niche works with it; though some of the origin's classic acidity shines forth (in the way of bright citrus lemon-lime rather than the more customary red berries), De Villiers' maker's mark overruns it, tampers them down in favor of a sturdy vanilla-based foundation; somewhat a mismatch of house style-to-varietal

Uganda -- advertised "smokiness" usually just a smokescreen for poorly dried cacáo but this rages out honey caramel, just mild char & none of the promised fruit inlays… very simple stuff & easily the cleanest as well as best Uganda to date

And, finally, the main title above lies, for this review also includes an added bonus. Call it a 'good lie', a 'noble lie', moral & charitable. De Villiers produces no-ordinary Milk Chocolate but a…

Dark Milk -- pegged at 51% cacáo-content utilizing its considerable Ugandan stock (above); exceptional precision point-load of flavor that can only be described as a soft black-salt mine for deep brown toffee on a very stable chocolate platform; excellent… a unique combo of Uganda cocoa, South African milk & its generalized terroir unlike most others; the only other-wordly rival to Naive's Lithuanian grass-fed cow's Milk Chocolate; beautiful
Quality   16.3 / 20
Less a Grand Tour of cacáo origins & more an exposition of a particular house-style. De Villers narrows the distance between sources & negates their differences in this tasting flight by applying, ala Pralus, a rather equalizing roast. In all fairness, it lowers the temperature some compared to the Frenchman who occasionally blow-torches beans.

In spite of robust, deep roasting, De Villiers still manages to stay generally on-point / on-destination with each while simultaneously clustering them together in this collection.

Furthermore, the evidentiary amount of work, notes & explanations that accompany it are commendable, far ahead of the field & even ahead of this label's experience in crafting chocolate. In a word, the whole effect, 'precocious'.

A worthy journey thru the tropics / topics of cacáo & chocolate by a barsmith set on making its mark.