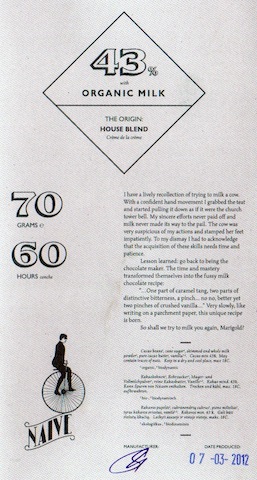 Impact
A baller... a malt-baller. 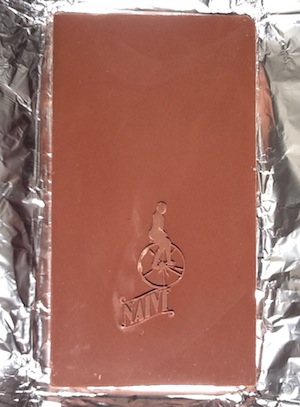 Message to Shawn Askinosie & his CollaBARation partner Jeni of Spledid Ice-Creams: this is how to malt a Milk Chocolate.

Judicious use of vanilla -- more than just waving the bottle over the chocolate liquor / less than heavy-handed -- adroit & ambidextrous.

While organic cocoa sometimes can be a hit or miss proposition, organic milk evidently works wonders.

In this case, straight from Naive's dairy farm which it operates alongside its chocolate studio. Wholesome & true, though perhaps lacking the creamed richness & hay notes of Alpine heifers so exalted in Swiss, Italian & Austrian MCs. In its favor it has something else going on (evidenced by the outstanding Aroma & after-taste).

Maybe the grass really is greener on the other side of the fence... that now-imaginary demarcation between East & West Europe. Whereas Swiss milk for chocolate-making is mild & often has malt added to it, whatever the cows feed on in Lithuania seems to help in developing a natural malt (with an assist from a leisurely & lazy conch which, granted, compromises Texture but leaves the overarching structure intact).