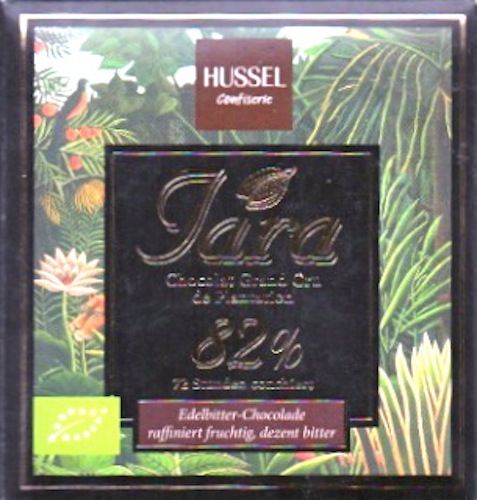 Impact
PanAm started with the idea of Pan Americanism. An airline seized on the concept in 1927. A decade later the PanAmerican highway began construction.

Today, a) political schisms between Latin America & the superpower up North, b) a road with severe -- forget the potholes -- whole gaps, & c) a bankrupt air carrier (a victim of industry deregulation / consolidation) whose afterlife of an iconic building standing proud in the Manhattan skyline followed by merchandising, all adds up to d) hope turned nostalgic.

Iara once was a cacáo estate in Ecuador sheltering some vanishing Nacional cultivars. Greater opportunity costs in rubber & bananas led to clear cutting of its cacáo trees.

But as with branding any respectable legacy, the name lives on & so too the spirit… down the road (aptly), less than 5km at Iara II.

In this bar Hussel leverages Iara, then contracts Coppeneur for private labeling.

Aroma   8.3 / 10
82%
potent as ever
claustroflavic / suffocating density
pounding Earth works: soil, clove, fungi, teak, espresso… such a bottom feeder, no way but up

62%
blasts up dark caramel…
… flickering apparitions of almonds, umami, vanilla-clove + royal black mulberry but nothing substantial to compete with the full-on dark chocolate caramel -> ongoing burnt butter flan top
Quality   18.4 / 20
82%
A re-wrap of Coppeneur's self-same Iara Dunkle in a bit of a pale shadow of its former incarnation. But only by a few shades.

If the original resembled a rottweiler, this bar has been spayed -- with cocoa butter.

Properly & carefully engineered for a market unaccustomed to the 80% class. Make no mistake however, it still clamps down with some bite & pressure…. just tamed, considerate, & loyal to its prey.

Mercifully, unlike the Dunkle, the earlier smoke-damage has been controlled. None to speak of here. Evidence that Coppeneur found the ‘off’ switch on the roaster in demonstrating it can still produce the goods after a recent string of disastrous years.

1 instant & eternal note -- brown caramel -- practically nothing before / nothing after, just all-encompassing. Automatic power & endless stamina. Stunning & remarkable, as if proof for the infinite via gastronomic chocolate. Oh, entirely sumptuous too all along the concourse. A world-beating phenom & absolutely enters the Dark-Milk pantheon.