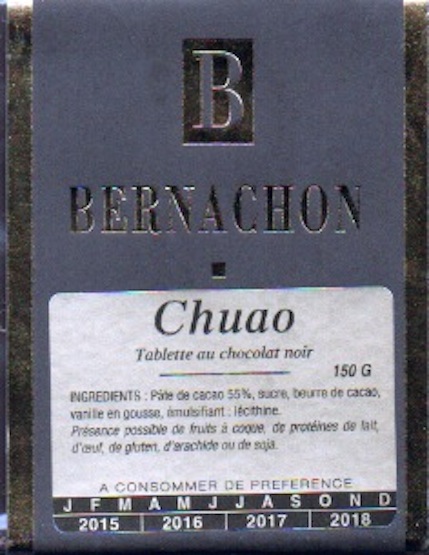 Impact
Been awhile since taking stock of Bernachon, on this the 60th anniversary of its founding.

In that time the barsmith has stayed a pretty predictable course guided by an indomitable inner heart..."the only eye that can perceive the invisible" wrote Saint Exupery… because what a chocolate ends up can be quite inapparent from its beginning cacáo seeds, thus rewarding the ability to project.
Appearance   4.1 / 5

Chuao
Terrific middle stanza; while the opening & closing brackets dominated by vanilla-roast. Thus a generally inexpressive Chuao -- some of that on account of the low percentage cacáo-content (officially listed at 55% but Bernachon only factors cocoa mass into that calculus & never the added cocoa butter), the rest due to the vanilla inclusion hampering the chocolate.
INGREDIENTS: cocoa mass, sugar, cocoa butter, vanilla, lecithin

Capsule Summary
If Bonnat & Morin, as well as to a lesser degree Valrhona, represent the Grandfathers & Grand Dame respectively of the French artisanal chocolate scene, then Bernachon along with Pralus & Cluizel are the primogenitors. These 2 bars show the house continues to hone its traditional ways, eschewing innovation for the most part, in favor of the tried & true. All good… by & large.