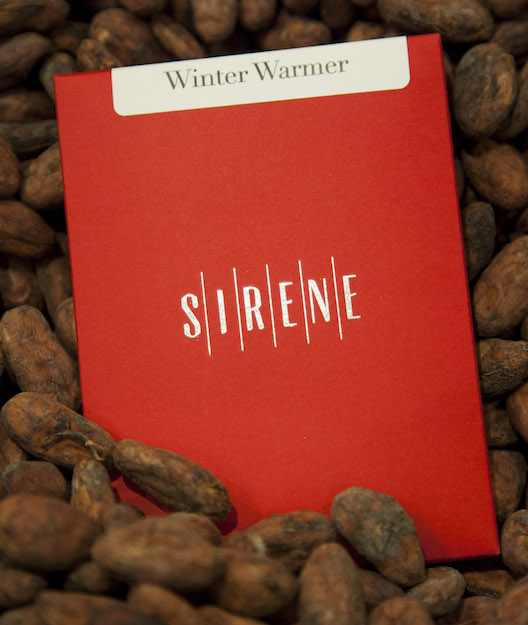 Impact
Vitality Air, a company in Canada (from where Sirene also operates), started out bottling Rocky Mountain air as a joke only to see its product fly off the shelves in... polluted China.

A can of the "fresh air" sells for around $12 -- about the same for these chocolate bars.

Whatever Sirene might be breathing or vaping -- O2 & otherwise -- something's in the air up there as this collection attests.

Tolerant & palatable for the percentage. A condiment of the darkest order.
As with practically all Camino Verdes, quickly establishes & then maintains its equilibrium. The only foible: taut Texture which splinters early on into a sticky paste.

Ecuador
Esmeraldas; 73% cacáo-content
mild exquisite chocolate with just a brush of embered roast & a spiced touch -> pings off those woods in the Aroma, especially the laurel -> sublime cinnamon-rambutan -> floral imprint to finish (Sirene describes it as gardenia... count it) -> sacha inchi in the semi-stringent post-script

Esmeraldas in all her glorious finery. Sirene courts this beauty with aplomb.

Easily the finest Lachua to date after some real beatdowns. A quantum jump in fact. Almost suspiciously good. Thanks to the likes of Sirene in concert apparently with post-harvesters on the ground, the gap between Guatemala & the rest of the premium cocoa world continues to narrow -- considerably.

Respectable. More tugging than teasing as the flavor tags yank at each other in some off-alignments that nonetheless situate well enough if not quite settle down.

TZ with each & every release leaps & bounds to astound. Ranks favorably & right up there with Palette de Bine's rendering.

Fairly restrained for both the percentage & especially the origin to suggest that maybe the cocoa broker (Åkesson) delivered either some of its off-season harvest or the less volatile varieties.

Dark-Milk Madagascar
the nose on this a cheese wheel more than a chocolate milk
once on the tongue, a Slo-Poke® / Milk Dud® dappled with candied fruit spots... a bushel basket / rainbow of 'em

65% cacáo-content often optimizes Madagascan cocoa without any milk.
In the formulation here, the lactose + cane sugars achieve the same while further enhancing the array via fun 'n sexy caramel action.
Rather than feeling & flavoring ponderously at this weight, Sirene keeps the craft buoyant, even aloft.
Such equipoise twixt the cocoa, the dairy & the sugar.
Joins the small pantheon of GREAT Dark-Milks utilizing this island origin.
World-class.

Winter Warmer
aptly named... after its warm festive winter flavor.... a Dark-Milk utilizing Tanzania cocoa (above) spiced with a beguiling mix of clove, nutmeg & cinnamon so symmetrically balanced that none dominate or even lead but each seamlessly integrate into a gestalt blend which in turn condenses this cocoa's volatiles into fruitcake-worthy concentrations
Quality   18.1 / 20
Consistency throughout. Uniform hi-quality. Uplevel chocolate.

No miscues whatsoever. None perfect (who is?), all excellent though.

Bold yet finessed. Few dare, for instance, produce any unsweetened 100% cacáo-content bars let alone two of them! And so ably so. In the other bars, the point-to-point notes & colors dance then pool into rippling tessellations; electrified & ionized melt gastronomy.

Sirene's M.O. seems mid-point to the golden mean. Nothing overwrought or underdeveloped. Just centered at the optimum.

Among the Big 4 if not the top of Canada's craft chocolate barsmiths.