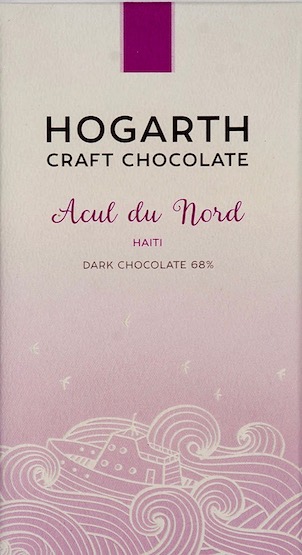 Impact
With New Zealand way out there in the South Pacific as its launch pad, this barsmith goes into overdrive for tricks. World-grazing destination voyeurs ordering up cacáo from far flung places. It's in the name & in the blood; a recombinant mix of a thrill ride & the wild Hogwarts Academy.

Such produces headstrong, independent, do-it-their-own-way risk-seekers, a sub-universe unto themselves.

This frees them from that awkward, frustrating tangle of being off by their lonesome on Planet Earth. So Hogarth kick-starts a spot for Type-As (Adrenalizers) & Type-Ts (Tasters). Tapping into that exploding vein among thrashers, fanatics, & slaves-of-chocolate hell-bent on gnarly.

Gianduia
namesake gianduia thru & thru at the opening tip with, as the progression melts, a sour-bitter twist thanks to stalwart cocoa of enduring stamina
Quality   15.5 / 20
Acul du Nord
Produits Des Iles SA (PISA), Haiti; 68% cacáo-content

Not the manifold flavor the Aroma teased but a powerhouse nonetheless. Hogarth really amps it. Strength thru sweetness. Such succulent brown tones & fruits. Well-measured & cut to suit this origin.

Sourced from the PISA org whose advancing techniques in handling the poly-crop 'Creole Garden' cacáo were foretold in Taza's release a couple years ago.

Once again Hogarth brings heavy. Except this one lays on bitterly. An unruly allotment -- several misfits among the staunch middle of the bell curve that overall makes for misalignment. Alternates between un/appealing currents, some which run concurrent. Sort out the bad seeds & this wins.

Seamless integration at a perfect pitch on the first lap around the lips to give the Domori gold standard a run for its once-novel dark chocolate Il Gianduja Fondente.

This bar eventually lags to an intriguing then intruding cocoa that may furnish fresh novelty -- that sour-bitter tonic in the mid-section -- albeit somewhat faltering. Surprising too, for the regional cacáo packs a punch despite constituting less than half the total bar in a Barithmetic (Cocoa / Hazelnut / Sugar ratio) of ~9:6:5. Further flavor development of the base chocolate would smooth the spikes & jolts. Which might work against the intent here, viz., to awaken somnambulant tastebuds jaded from umpteenth bars of the fine stuff.