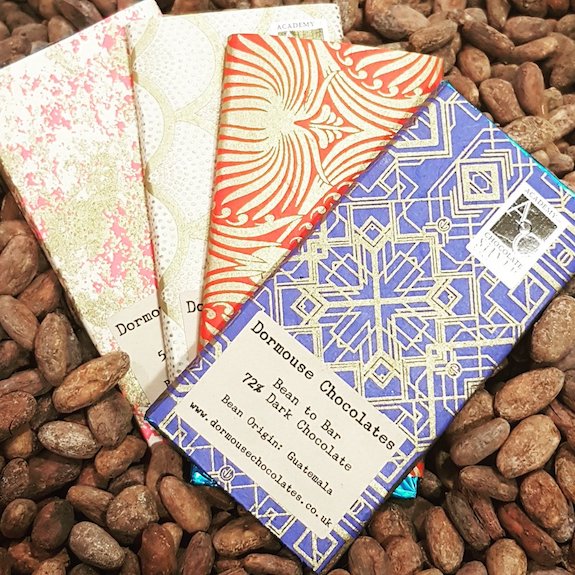 'twas before Christmas & all thru the house
Not a creature was stirring, except for Dormouse...
... Chocolates out of Manchester UK which intersects Brexit, Climate Change, Fair Speech, et.al.

As with tea hungover from a vanquished empire, England will survive its quarrel(s) with the EU one way or another & continue to import cocoa. Some things, like tropical groceries, ppl just gotta have.

As per Climate Change, virtue-signaling among cocoa pod-brains on social media belies that the LCA (Life Cycle Assessment) for cacáo / cocoa / chocolate ain't pretty -- even in agroforestry settings. True, the impact of eating chocolate individually may not rise to the level of flying private. Then again, billions consume it everyday where only billionaires jet around in their G650s.

Habits are a helluva drug. Precisely why they're habits. Whether chocolate (morish = more + more), sex (bulging population, everybody?), Xanax (mental dis-ease) or whatever, w'all got at least one addiction.

Finally, to the word-police & censors trolling the multiverse with all the zeal of minders in the PRoC tallying 'social credits', it's no doubt unfair to print anything but praise for chocolate nowadays. Especially when stars, ribbons & medals get passed out freely as credit cards to pile up so much indebtedness (just pay to enter, everyone a winner).

So to sample then update those once-revolting bad boys, The Clash, off their Combat Rock LP, you have the right to free speech, if you're bold enough to use it.

Philippines Dark-Milk
56% cacáo-content; Kablon Farms, The Philippines
dense milk chocolate fudge packed to a near cocoa-cheese density (in the vein of Stilton blue)

Bland beginning; the end anything but. Heck of a progression that keeps building to a fine crescendo.

Trad elements mix with the unconventional. Carefully pegged at 56% cacao-content which pares the milk & the cocoa in a shared ratio -- neither dominates; both influence the other. Not the cleanest or smoothest milk powder. The FXs though awoke.

Guatemala Dark-Milk
similar dynamic to the Philippines Dark-Milk (above) except less balanced, more caustic, + a winking berry nod toward the back -> caramel -> cement cap stone

Mercifully tastes better than it smells.

Fun, fun, fun til... mommy takes the candy away & the dentist starts drilling.
Quality   15 / 20
Mixed bag. The Guatemala some real dog squat. The others make the cut, with the Filipino dark setting the bar.