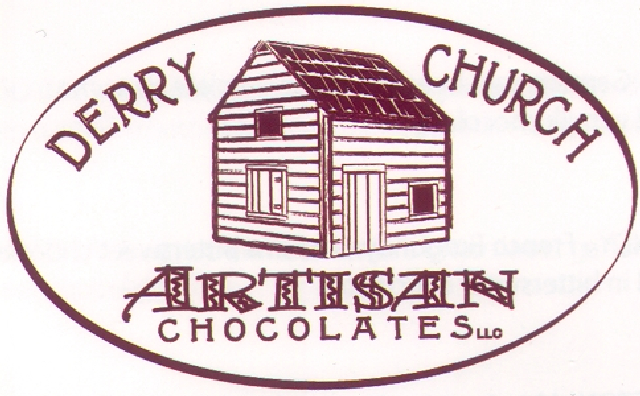 Impact
In Derry Church the pews must be filled with sacks of sugar.

The discrepancies so severe between several pieces to wonder whether two chocolatiers had a hand in this one box. Or the left hand of God is uncoordinated with the right. (Which might then explain why creationism & evolution are having a hard time of it together.)

Some stunning peaks as well as, alas, a few fracking sugarholes (blood sugar should come to normal sometime the day after consuming this box).

First a word about Chef Eric’s publicity materials (circulars, website, etc.). Visually it all looks fairly standard but read closely... his language is original, personal & bang-on, at a far remove from all the ‘yummolicious spittle’ served up by scads of chocolatier clones out there who either repeat it rote or hire PR firms to make them sound stupider than dumb. For that, Chef Eric deserves at least a Pulitzer & maybe even a Nobel Prize for Chocolate Literature. Indeed, some copy in this review borrows from him. Why re-write script when it can be quoted? This guy can talk his business.

And walk it too? Well... financial hardship prevented him from any formal culinary training. Little does he know that he knows a lot... take it from an evil anti-culinary school chef, what a benefit. All the greats are self-taught... eventually.

Derry Church’s Int’l Collection, named & flavored after cities around the world, epitomizes zietschuangundermutton -- or world in a mouth. These travel bites do for the globe what Coco-Luxe chocolatier did for Americana: they encapsulate a place, a tradition & a mood.

Currently a d.i.y. style work-in-progress....construction & assembly in development. Set the clock to revisit this brand in 3 years. By then the skills should rise to the level of its daring & passion.

Selections
Lyon - aptly titled after France’s gastronomic capital; “brooding intensity” cut only by a “knob” of butter cream; some sweet-cream too that raises the profile of the cocoa dust & brings a fruit-laden touch to the austere 70% couverture (rather heavy & flat for a Palet d'Or type piece & the cocoa powder's base-note overpowers, + an odd smoked herring upper-sinus waft nullifies a smooth-soft yielding ganache.
Rome - nice espresso-level caffe (if a bit synthetic Nescafé™) but über tooth-ouching sweet to keep 3 guises of chocolate (White, Milk and Dark) in the game before destroying any in a flat finish; diabetics...be warned, avoid this or the insulin pump will blow a gasket
Savannah - the only thing grassy ‘bout this savannah is the sugar cane (which belongs to the grass family) drizzled all over this inverted Dutch Peach Crumble w/ oat topping & White + Dark choc fill; once again, too sweet & busy but dude, where's the peach? (greatly juxtaposed texture but a total sugar kill on flavor devoid of any fruit notes)
Kandahar - terror-alert: pomegranate reduction packed in VCD (Vile Cream Device) left over from the British Empire’s days in Afghanistan strapped to a suicide-bomber that spews over taste-buds everywhere; sloppy-second's that shoots its wad & drips down the bloodied face with no satisfaction; overly processed dark coverture with good yielding snap married to a respectable but hyper-sweet fondant that overpowers the promise of pomegranate, dumbing-down what could’ve been a remarkable confection. Kudos & bravo for the novel attempt (after all, does the world really need another chili or bacon infused bombone?) but include some Afghani hash or at least saffron from the hillsides there for the next victim
Burlington - what has all the hallmarks of a coat factory turns out to be outrageously good; simple & direct Milk Choc enhanced by Vermont maple sugar; half-adorned roasted pecan lends depth & crunch
Winter Haven - orange juice, zest & liqueur enrobed in a sunburned White-on-White; redundant though the soft-sexed ganache might even entice Dark-Siders to give this sweetie a try
San Francisco - demerara salt the gunsmoke that fires up fig, molasses & walnuts around Dark Choc w/ balsamic-like tendencies; shows formal restraint & measured proportions to overcome the overdone compliments that black mission fig & black molasses potentially present to each other; nicely orchestrated
Dublin - Bailey’s Irish cream hooks up w/ in a café-cocoa combine; again, easing off on the sugar lets the components interact honestly; very well studied & spoken for... no ordinary drubbing in Dublin
Mumbai - another ambitious compound (curry, shredded coconut, White & Dark chocs + black sesame seeds), what some might term a ‘cluster fuck’ served in a dirty, sugar-coated sock of a chocolate couverture strikes really unreal-savored depths for what amounts to the height of the collection; Peter Principle in effect