Impact
After a celebrated launch in 2013 with critically-declaimed calamity bars (the lowest-rated Chuao on record, for instance; no mean feat considering the degree of difficulty in destroying chocodom's most enduring potentate), Alain Ducasse sends out the artillery in this rather unFrench box of bonbons… loud infusions of low chocolate potency… as if in retaliation (or just a case of this site's self-importance?).

Whatever the exact motivation (probably just all business), these pieces feel spiteful yet uninspired. 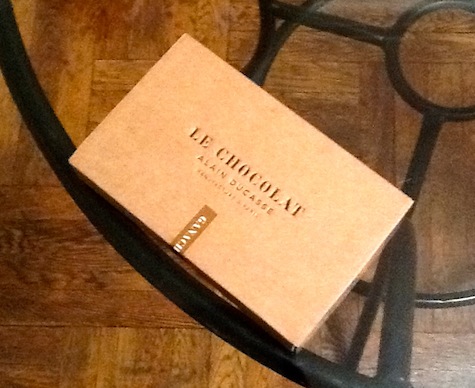 Presentation   2.3 / 5
pedestrian for such a well-heeled brand
arrives basically in UPS parcel post shipping box
plebe pieces within; wedged together without a gap to breathe in 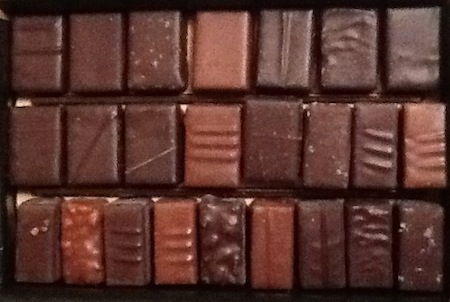 Pistache -- brooding praline lifted by a touch of, huh?, mayo?… mon diet from the home of gauche; a mistake or magic? either way, incongruous & offensive yet perfectly acceptable

Thé et Citron -- so named but really mealy-mouth texture & flavor of coconut (supposedly marzipan though), clear lemon for sure & maybe tea at the back; slapdash architecture / assembly

Cacahuète -- peanut butter spam of gummy mouth ala glucose / HFCS; an affront to the humble peanut

Noir Amande Éclat -- praliné of caramelized almonds; what this lacks in chocolate presence it doubles-down with sugar; très sweet

Lait Amande Éclat -- Milk Chocolate version of the above; triples down on sugar; ATTN Dentists: get set to drill & fill; when the French start whiffing badly at this old national standby, Élysée Palace needs to step in & act

Vanille -- plain, even bland, with no real distinction; compared to the others in the box, a winner

Framboise -- raspberry pulp fortified with raspberry liqueur with no regard whatsoever for chocolate; one-sided

Pruneau Armagnac -- prunes marinated in brandy & enrobed in a Dark coat; absolutely fab combo… the fruit sugar cools the liquor while the heat of alcohol warms the sweet; creative, cunning, & culinary; easily the best of the set

Coconut -- another praliné with a real promising start on roasted coconut & peanut (?) only to suffer the onslaught of another très sweet decline

Café -- as the French say, ordinaire