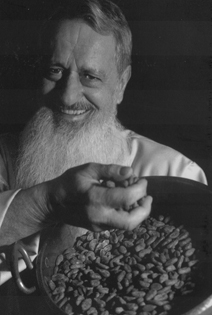 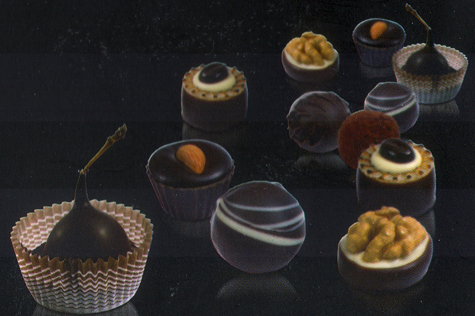 Textures/Melt   7.9 / 10
Flavor   48.3 / 50
‘Fresh’ doesn’t begin to describe just how ripe; nearly incomparable & nothing stilted – that’s how embarrassing it must feel to the rest of the field... super calibration / spare / utility... Unparalleled consistency thru-out the entire line-up, every piece one right after the other, virtually no misses. Even those that start off errant miraculously turn toward greatness. About the only valid critique that can be leveled, & a rather significant one, is the lack of much chocolate attack on the uptake & at mid-palate though it usually shows by the back. Cacáo rarely the hero, & far from the superstar here. Instead, Catinari possesses that ability to see the invisible effects of combinations so that chocolate’s influence is recessed but present, deployed to generate complementary under & overtones, then hangs back, happy to bask in the reflected glory among a constellation of elements.
Quality   29.7 / 30
Experienced. Art is often the wisdom of knowing when enough is enough, & when to stop. Only the very 'hard-of-tasting' would label this 'banal' for which it’s occasionally reproached but proves revealing by dint of its very simplicity.
Selections 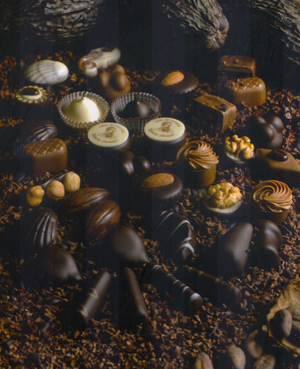 Cremini Classico - alternating layers of Dark Chocolate & gianduja essence blanketed in a Milk Choc shell, the gestalt almost yielding sweet almond oil; great depth & good horizontal spread across palate; compared to Venchi’s mass-market classic, this is the personalized craft
Cremini al Pistacchio - tritone complex (Dark Choc, Classic Gianduja, & Pistachio) swathed in Milk Choc generating all sorts of overtones (vanilla gelato, fruit glacé, & almond again in add’n to the stated elements); a world beater
Cremini alla Nocciola - instead of the more even-textured Classic or Pistacchio, Dark choc base plays to chopped hazelnuts; by altering the formula a few degree it pays off in huge differentials... thicker more viscous & rustic flavor igniting a vapor of brandy; perhaps too great a departure for some, while for others a heretic eventually canonized like a saint burnt at the stake (think Giordano Bruno) then compare this to Domori's rendering
Rusticelli Fondente - coarsely-chopped hazelnuts bathed in 71% Dark; naked preparation, stark presentation, & segregated flavors; rustic Tuscan beauty
Rusticelli al Latte - same unadorned form as the Rusticelli Fondente but here swathed in Milk Choc whose flavors in the act of masticating integrate for nut-toffees delivering a umami zap to the back
Rusticelli Bianco - more clean simple lines that epitomize Tuscany in general & these Rusticelli in particular, with White Choc taking its turn... finely roasted buttered nuts; simplicity kills
Noci - part of Catinari’s Forme del Bosco or ‘Wood Series’, this vents maple-walnut on the inhale while the inside taste reveals more of the same, just deeper... a walnut crunch covered in Milk Choc, the elements fuse so seamlessly by the end there’s no clue of the constituents save for a residual of the namesake origin: wood grain & walnut leaves; stunning brilliance
Monachina - walnut, marzipan-style; drier & mealier than traditional almond-marzipan with an inside-out play of White Choc sealing the interior nut-meat then Dark fondant wrapping all that; conjures up sweet-almond cherry streaking to soft orange bergamot at the back; sensational
Marzapone Quadratino - classic marzipan paste expressing fresh almond to extracted levels like oil coated in Dark; so utterly true & unpretentious that even those without a hankering jones for marzipan will recognize its honesty
Marzapone Sarotto - among the most elaborate assemblies of the collection; chocolate-covered café bean leans hard into a Dark fondant cupping the White Choc center laced with marzipan... hurtles dangerously on the edge of losing control in an all-out caffeine frenzy, then almond of all things restrains the kinetics & the piece regains its poise; a breathtaker
Champagne - pops the cork right off & splits it in half, the pressurized bubbles shooting tiny projectiles in this very liquid piece sealed in a Dark chocolate cask which together become a sweet toast to a kind of rich wedding cake; excellent fun-damentals
Grappa alla Pera - another liquid oozy-gun just splatters the taste-buds into a sticky sugar state; potent & dry, almost Tequila strength & arid; pear pomace pummeling the senses nearly numb & senseless yet, once again, fortified couverture matches the liqueur, cooling & calming the hot vapors trails by the finish for a type of distilled chocolate; an event of patience-rewarded; superb
Rhum Bacioni - an apricot kiss (buoyed by egg whites to give it that plush marshmallow cush) on a crisp wafer sozzled in rum; initially cums off a cheap hooker then, as ever with Catinari, turns to the real textural thing - soft & cocoa-hot with banana in between – to simulate that characteristic bittersweet-nut of Amaretto diSaronno; serious love only
80% Bar - Catinari may be no bean-to-bar maker, he is however a 1st rate re-smelter (beautifully brushed plate); the label reads São Tomé but the percentage, the aromagrams (wickedly fermented & roasted), & the all-telling flavor point to bud-to-bud barsmith (that’s cacáo flower bud to human taste-bud) Claudio Corallo on the neighboring island of Príncipe; coarse texture / coarse conche as expected (with Nibs no less) produces a stonewood opening -> good mid-point chocolate -> butter & cream take over the progression to escort fleeting reds to the smoked finish... flavor-wise one of the softest Corolla’s yet, remiscent of his 75% Nibble Bar with the greater cacáo-content probably made up in butter